Blake leaned back in his chair, rubbing his eyes for a moment, then sighed. He needed a break from mixing the new tracks, it was all starting to sound alike. 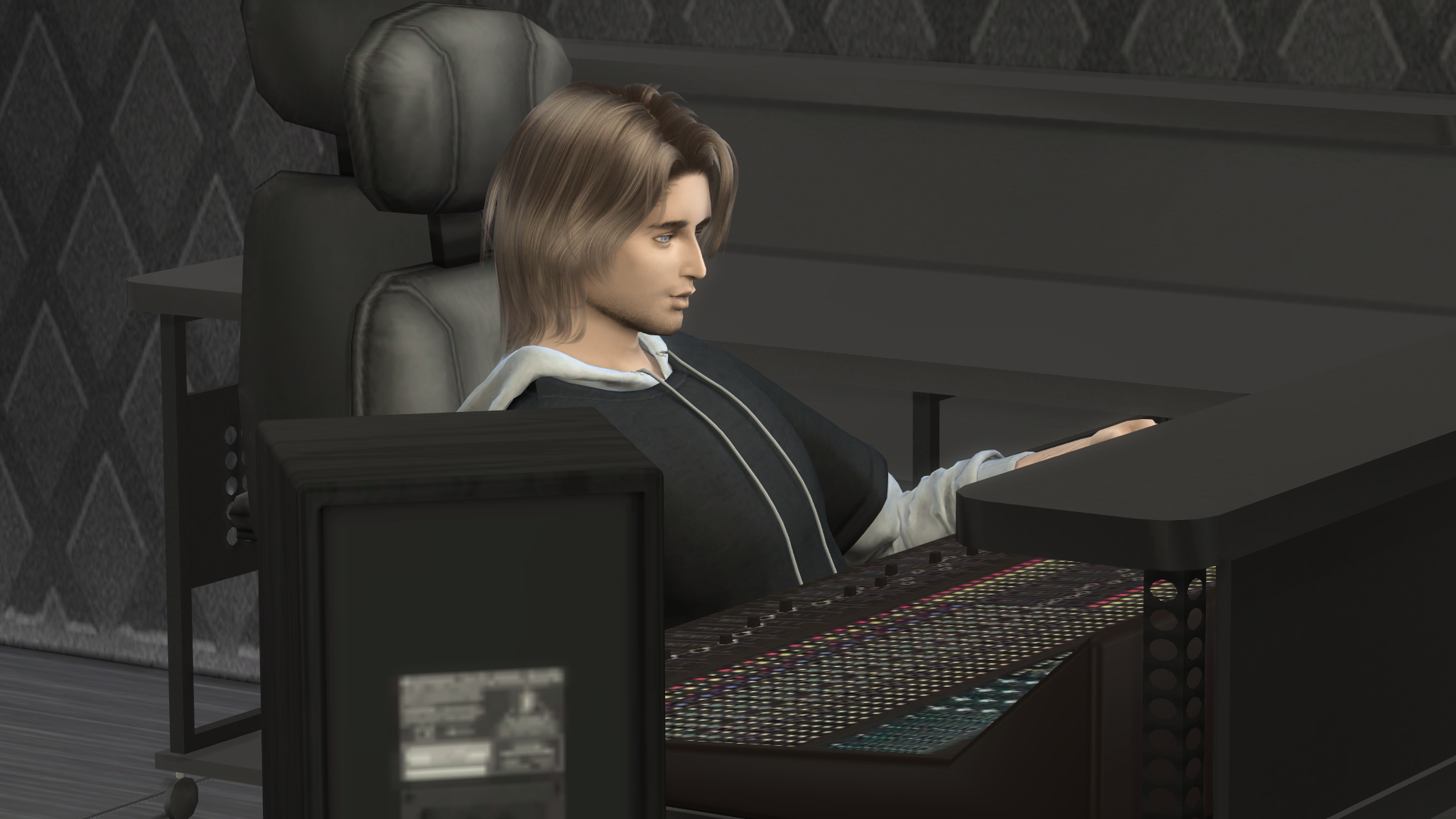 He went up the stairs and found Hailey brooding over the computer in the kitchen, where she did all her work from.
The Beach House was in a great location, but very small with not many options to expand. 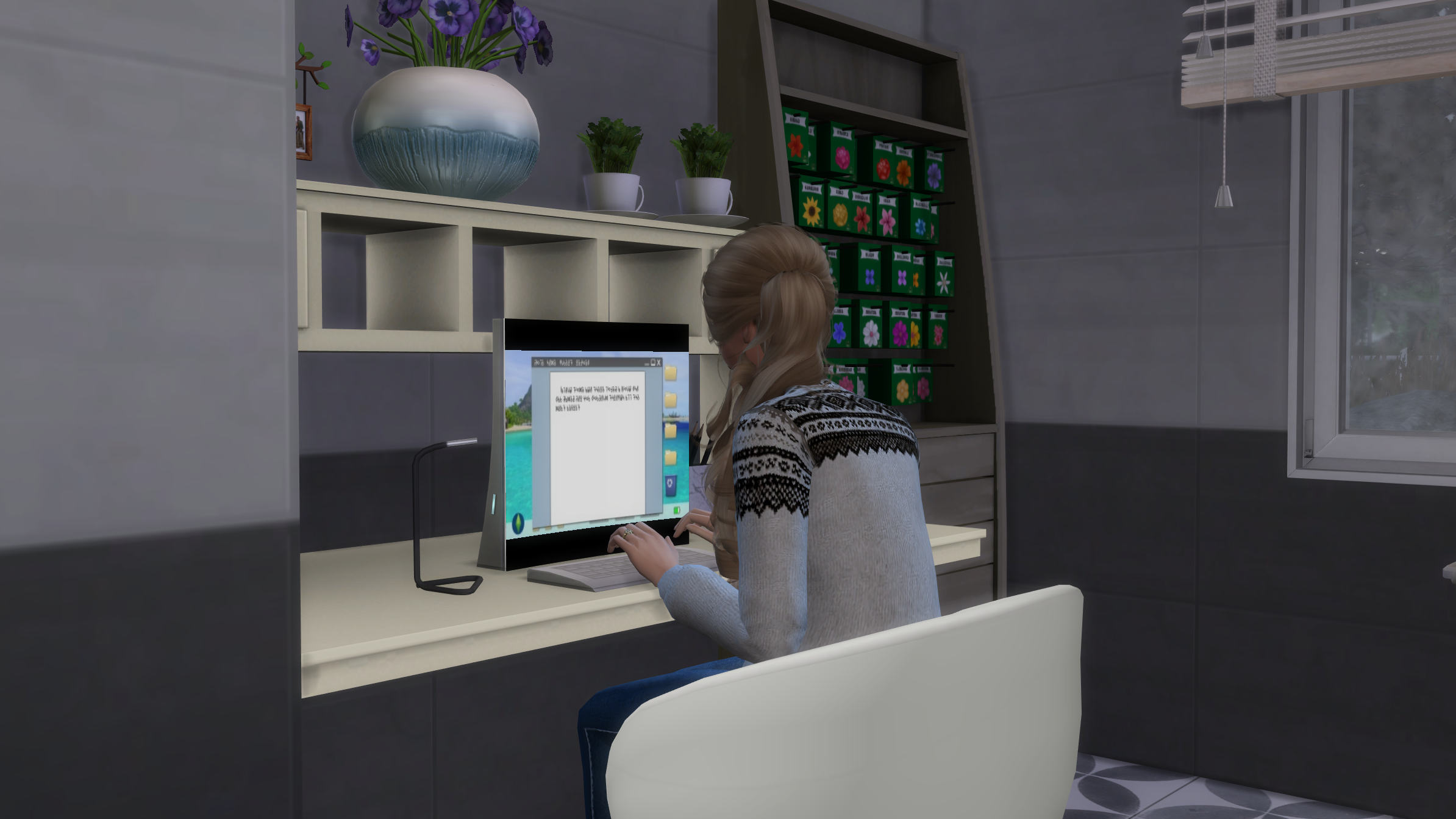 Blake’s studio was in the basement, both would have liked it above ground, along with a home office and maybe even a guest room – or even another kid’s room – but there was no way that could be done without tearing down the entire home and rebuilding from scratch. They neither had the funds, nor the patience to deal with living at alternate housing in the meantime.

“Hey …” she said, not looking up, still engrossed in whatever she was working on.

Blake started the coffeemaker, wondering when they had become like this. The oh so dreaded routine had set in at some point before either of them realized it and now they were in a rut. 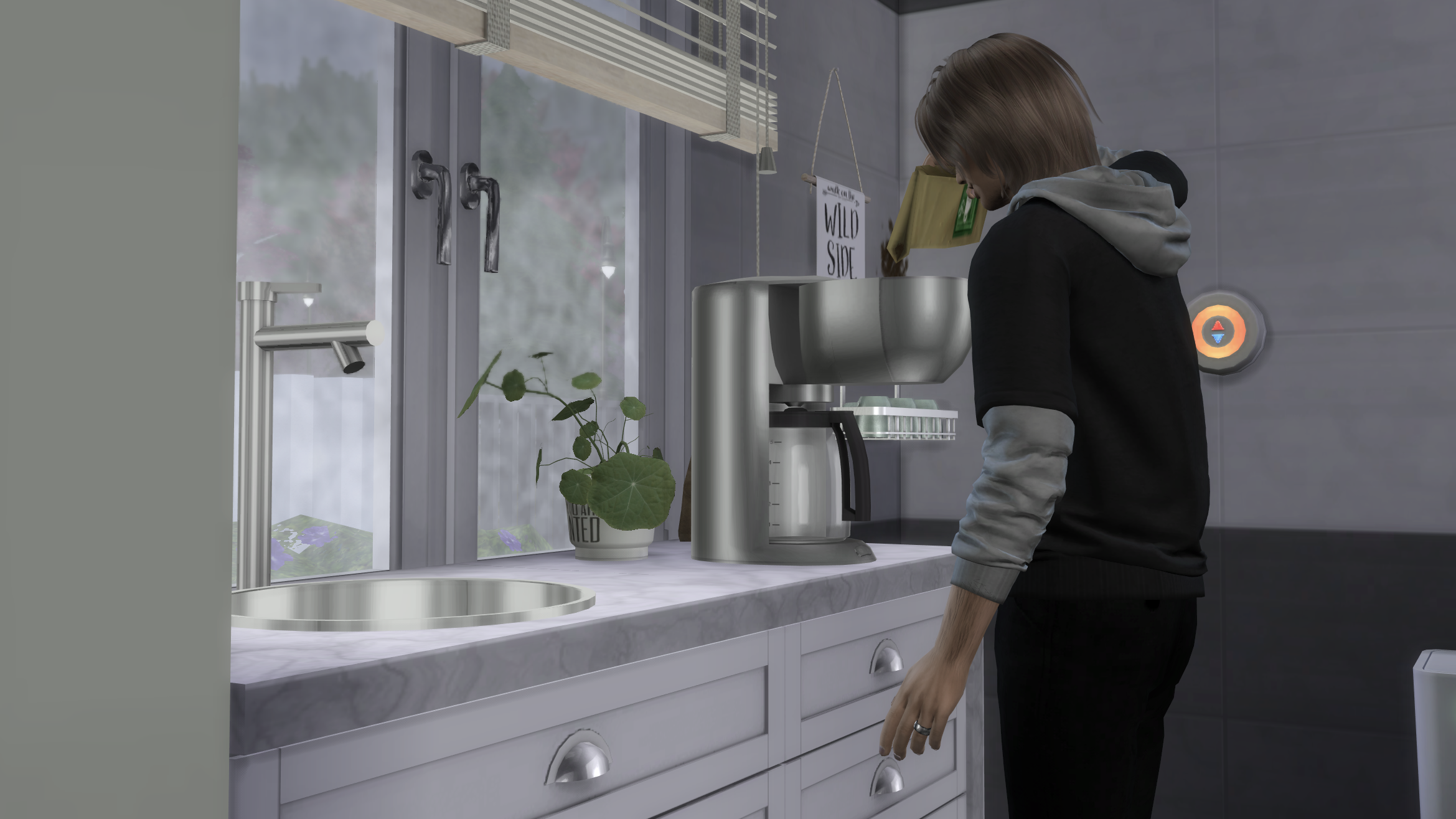 They had been married for a few years now, both no longer teens in love, but adults with responsibilities, bills to pay. And you could tell.

Their son Chase was growing fast and before long, he would be in school.
Blake shook his head at his unspoken pondering.

The memory send a painful jolt through him.

Had it really been years now that he was gone? 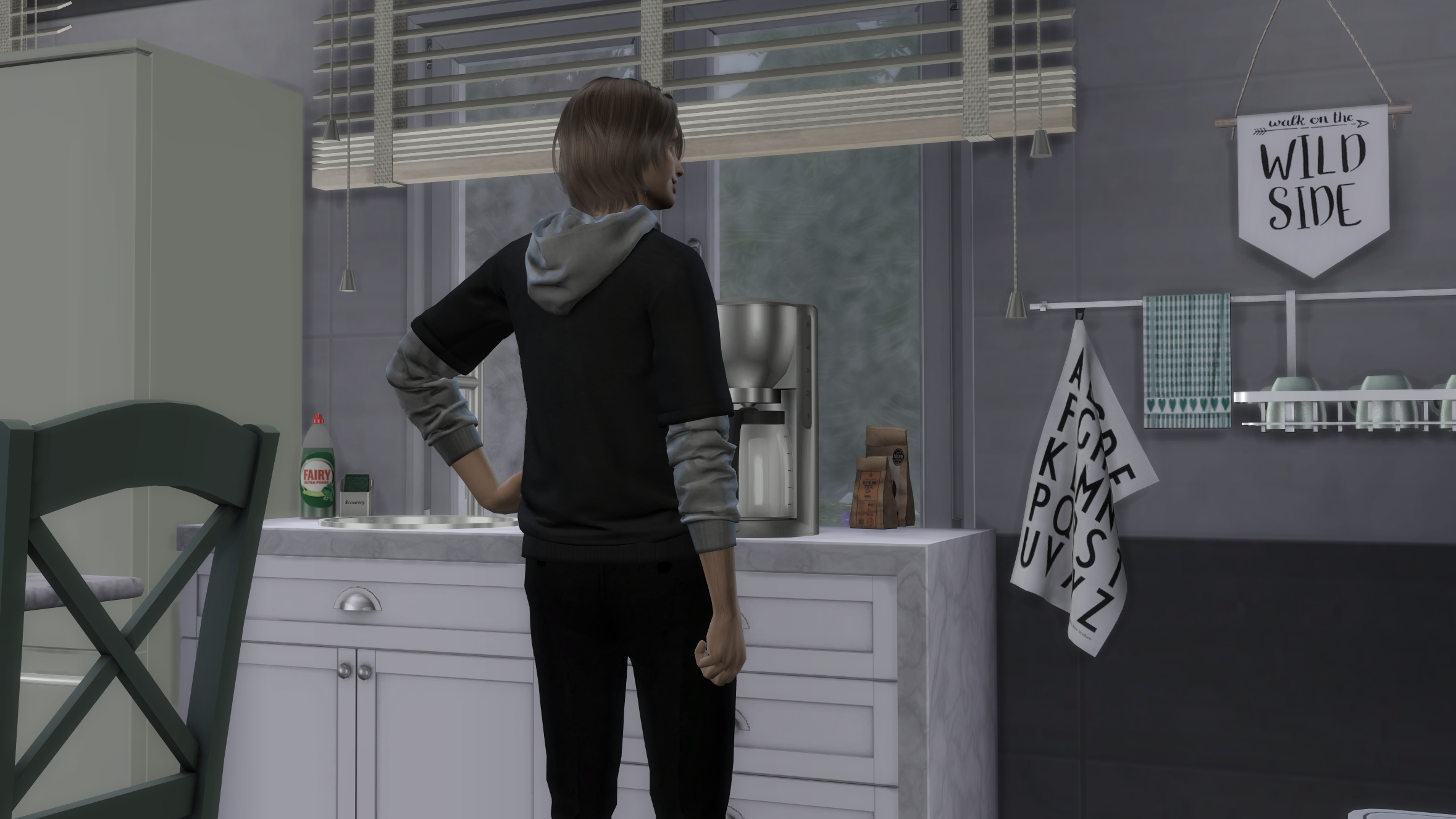 But there was good too. His relationship to his half-brothers. Good and solid, almost like it never had been different, even though it had. There used to be a time when he hated both of them.
Unfathomable now.

And his father.
A really strong father-son bond.
They saw each other often.
Not so often now, that his dad had started dating his ex-wife Blythe, once upon a time Blake’s much hated step-mother, again. Another memory he could no long understand. Blythe had never been anything but nice and kind to him. Why he hated her was beyond him. He really liked her now and found her and his dad’s newly rekindled romance amusing to watch.

He thought about all his friends and cousins, all of them without exception married and with kids now, most of their kids would start school about the same time Chase would.

His half-brother Parker married now, expecting their first child. Also something nobody ever saw coming.

But where do we all go from here? Or was this it? As good as it will get?

The question wasn’t new, it had been popping up into Blake’s mind repeatedly, more and more so the closer Chase’s 6th birthday came. As usual, Blake just pushed it from his mind.

The coffeemaker beeped, alerting it was done, so he filled two cups, brought one to Hailey. 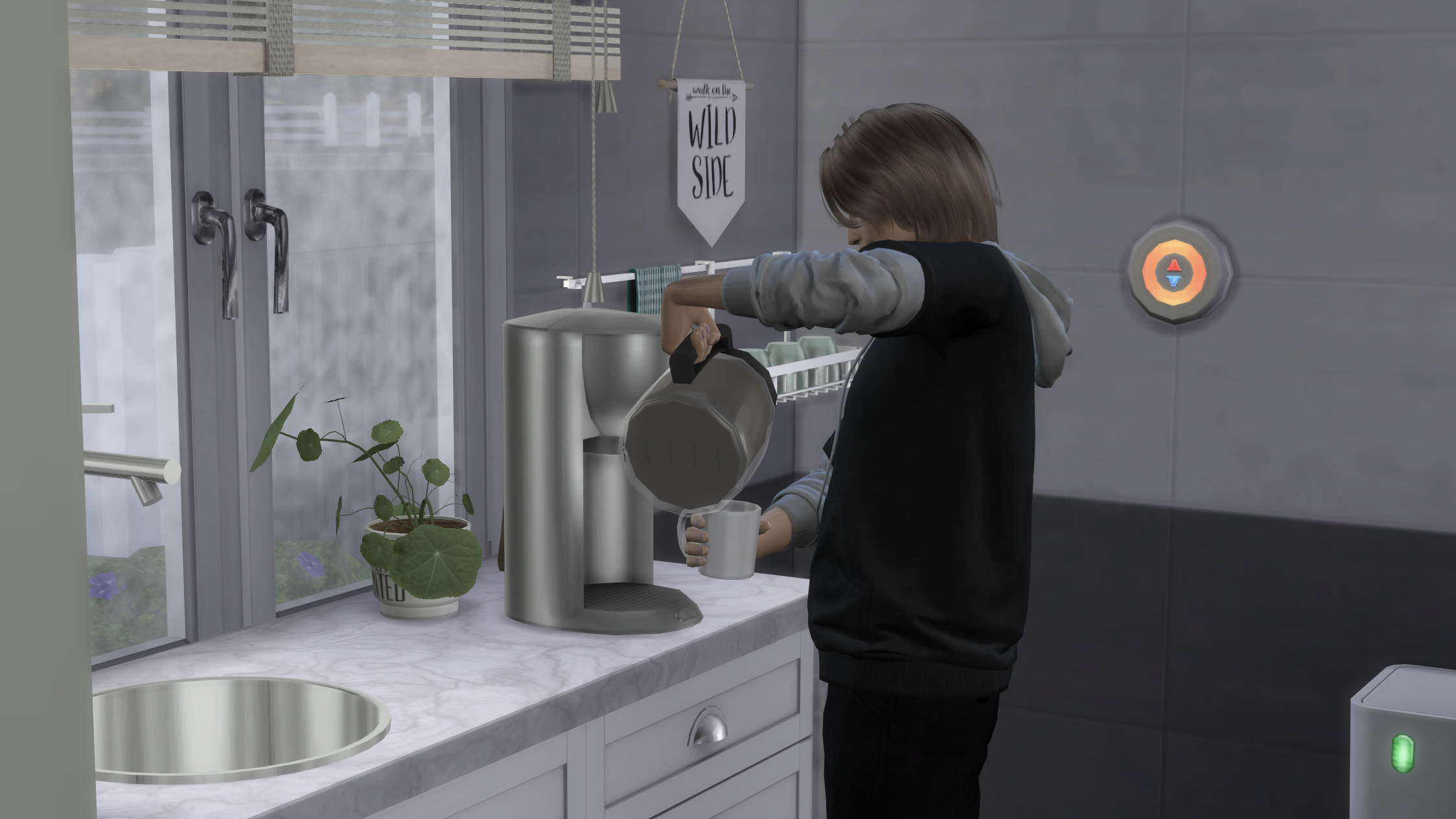 “Thanks baby.” she mumbled, barely acknowledging him.

“So, whatcha working on?” Blake asked, mostly to have something to talk about.

“Just some drafts, due by midnight. Sorry, gotta keep going.” she barely took her eyes off the screen. 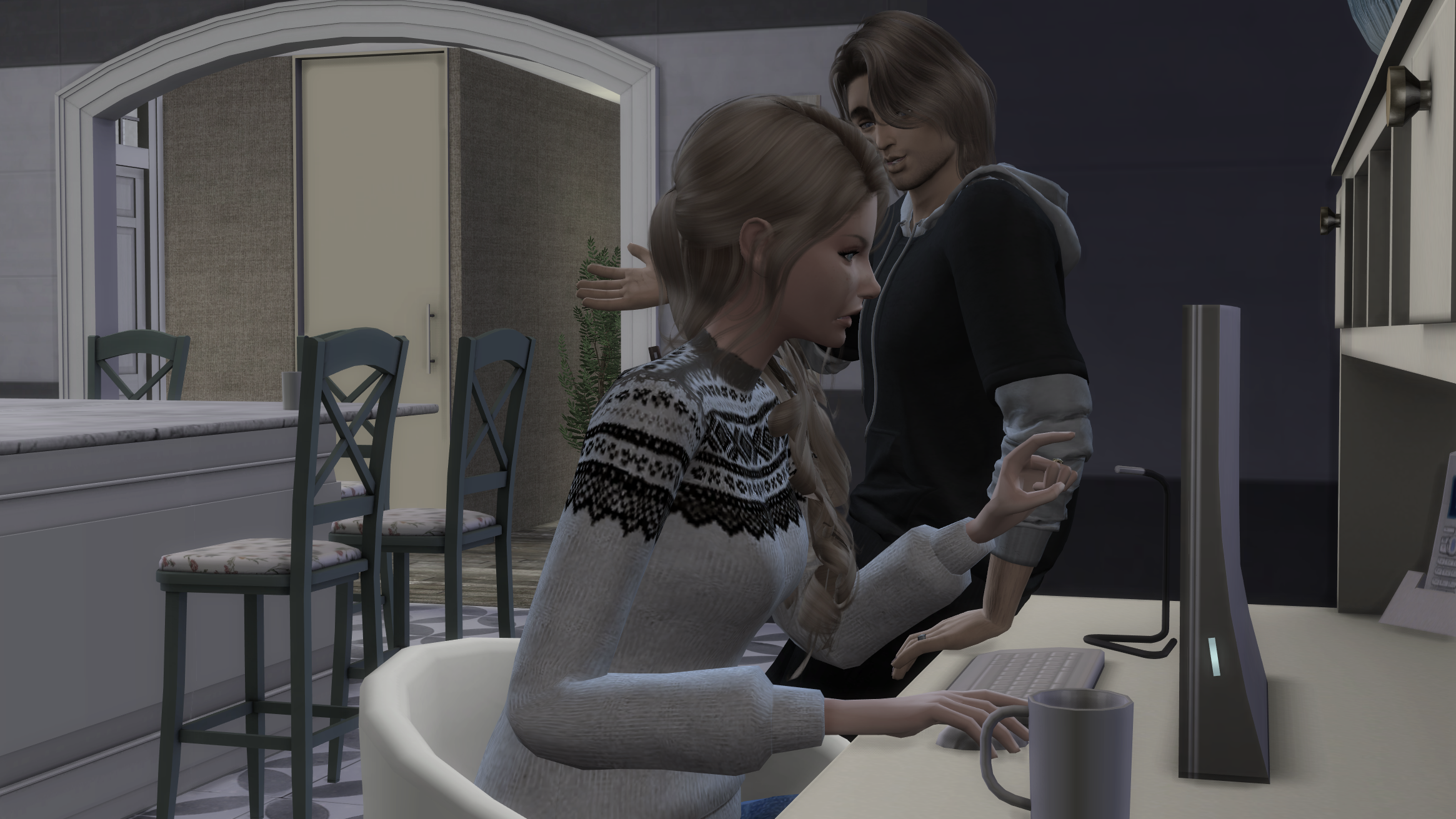 Blake started kissing her, rubbing her shoulders, nibbling on her ear suggestively until she pulled away.

“Blake! Stop! Sorry, can’t right now. I have a deadline and am nowhere near done. Raincheck?” 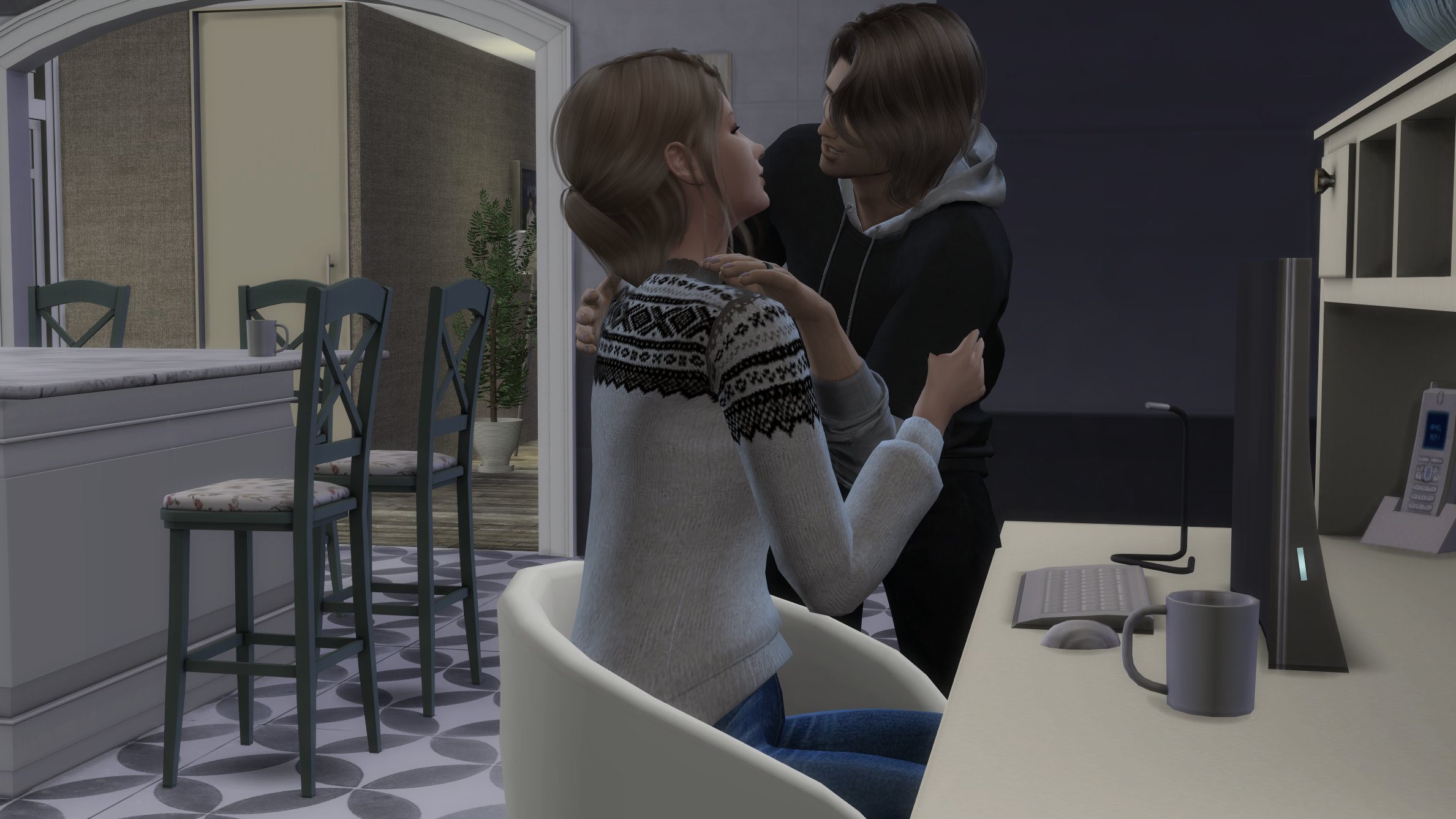 “Sure. Who needs physical affection, right? I’ll just sit here and wait it out until I am so old that I can’t anymore without swallowing a bunch of pills. Your dream scenario …”
Blake was obviously bitchy now.

“Yeah, yeah, whatever!” he was grumpy.

“Don’t be so immature, Blake! You sound like Chase when he hasn’t had his nappy!”

“Wow. Good to know that’s how you see me nowadays. Well, don’t let me bother you anymore!” Blake grumbled and stomped out of the kitchen.

His feelings hurt, even more so when Hailey didn’t even come after him or at least call him back, he went to the living room and dropped down on the couch.

This was exactly what he had dreaded all his life. 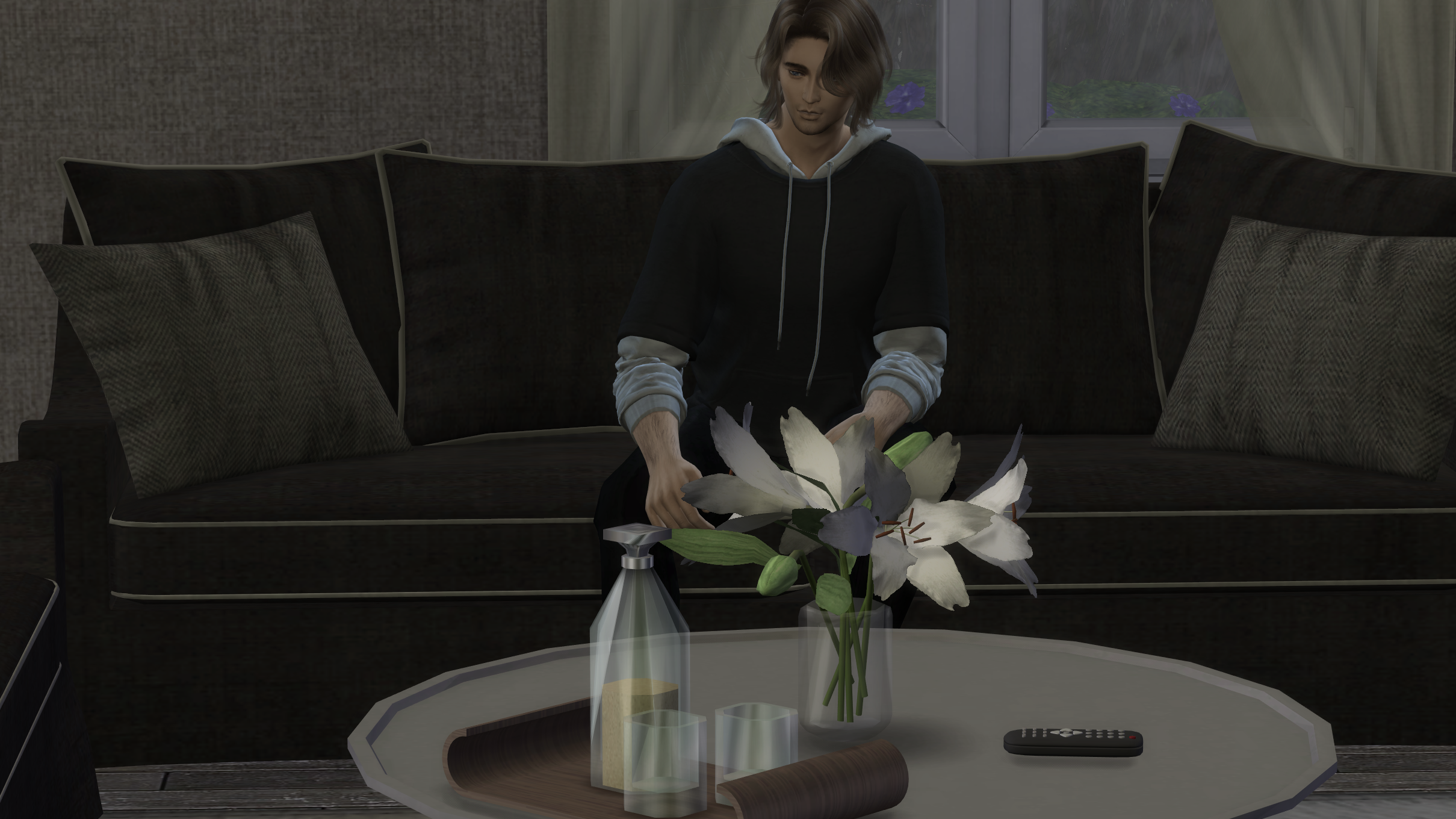 Routine. Boredom. Living next to each other rather than with one another, watching life pass them by and have scheduled sex once a month. If he had been good enough to earn it, Blake thought grumpily.

This had not been the first time Hailey declined his suggestive actions. Truth be told, more often than not did Blake find himself striking out with Hailey trying to be romantic with her.
She’d let him kiss her, even return the affection for a little while, but as soon as he tried to go further, she’d stop him. 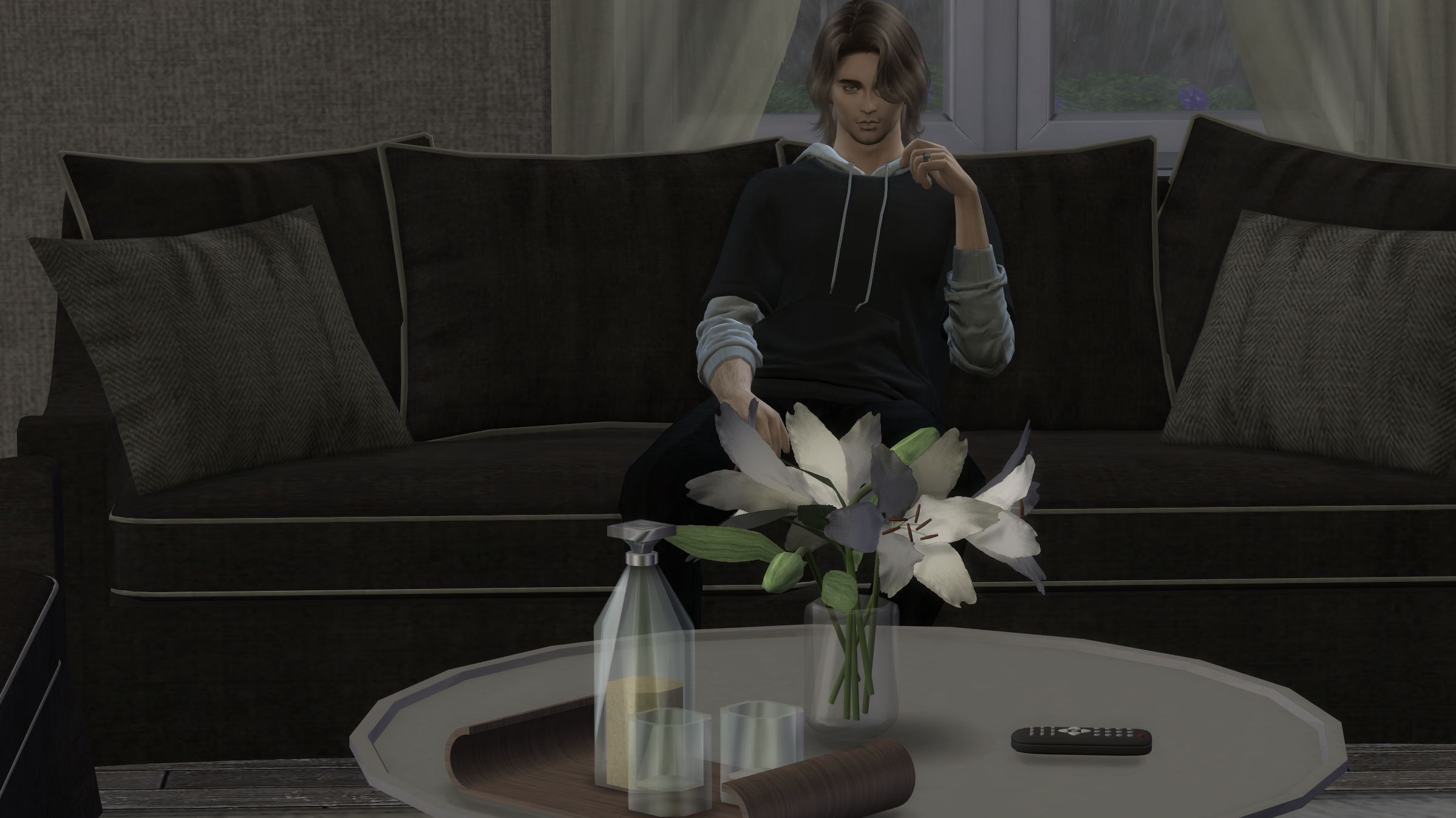 Many a night had he laid in bed, unable to sleep, only to get back up and sit in their living room, frustrated, rejected, love-lorn.

He guessed that some of her withdrawal from sex had to do with body issues. No matter how many times he told her he thought she was beautiful and desirable, she’d stop certain touching, or even swatted his hands away. 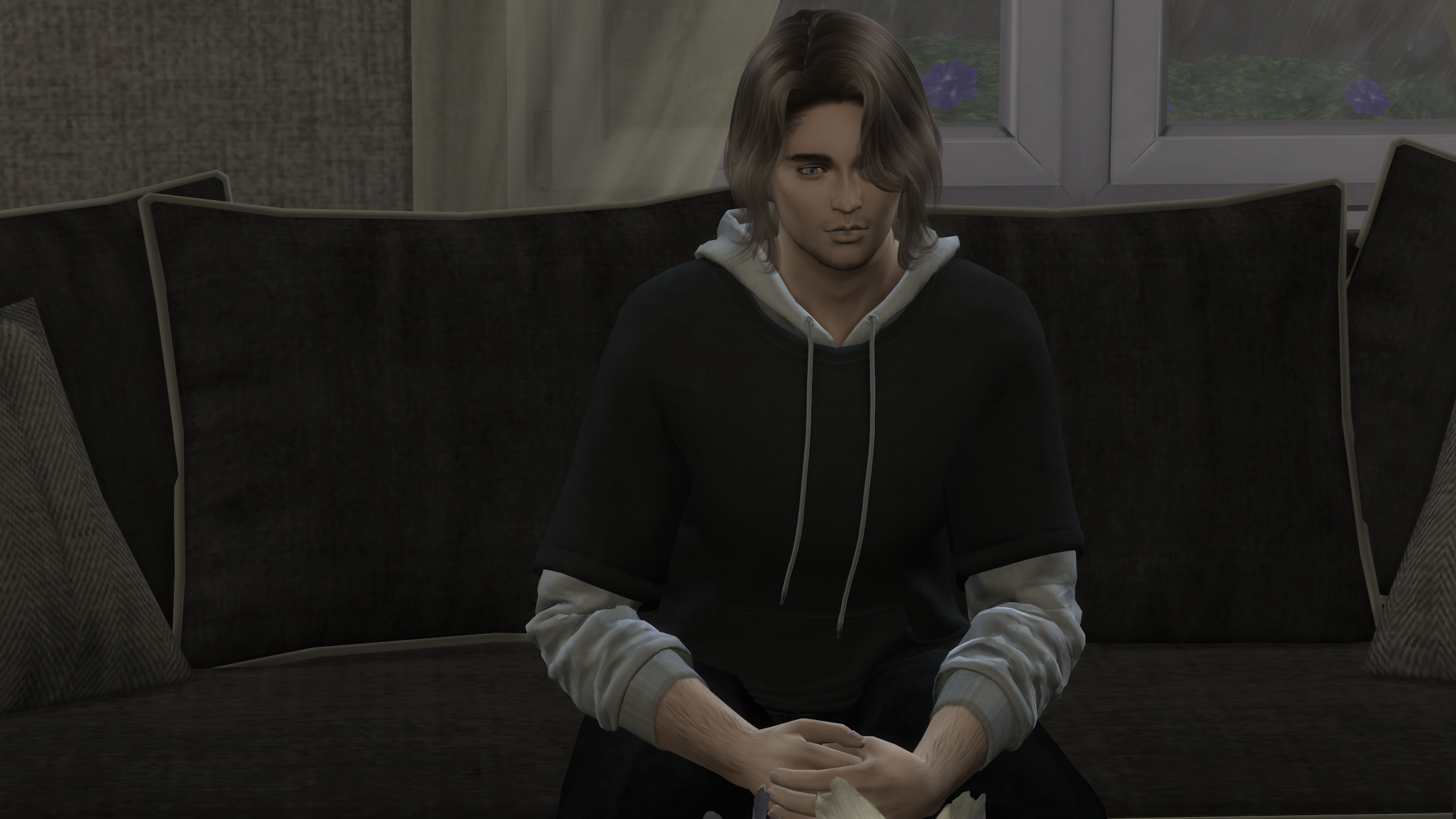 She had been battling weight gain almost since Chase was born, fighting to loose the baby weight and keep the pounds from creeping on while sitting at home most of the time.
On top of all was she pretty domestic, loved cooking.
Blake ran every morning to stay in shape, but with a toddler they couldn’t both run, the terrain by the beach wasn’t right for one of those strollers, so she stayed home and battled her weight.
She used to be very interested in fashion, but at some point after Chase’s birth her wardrobe became more and more ‘functional’, with ‘sensible’ shoes. 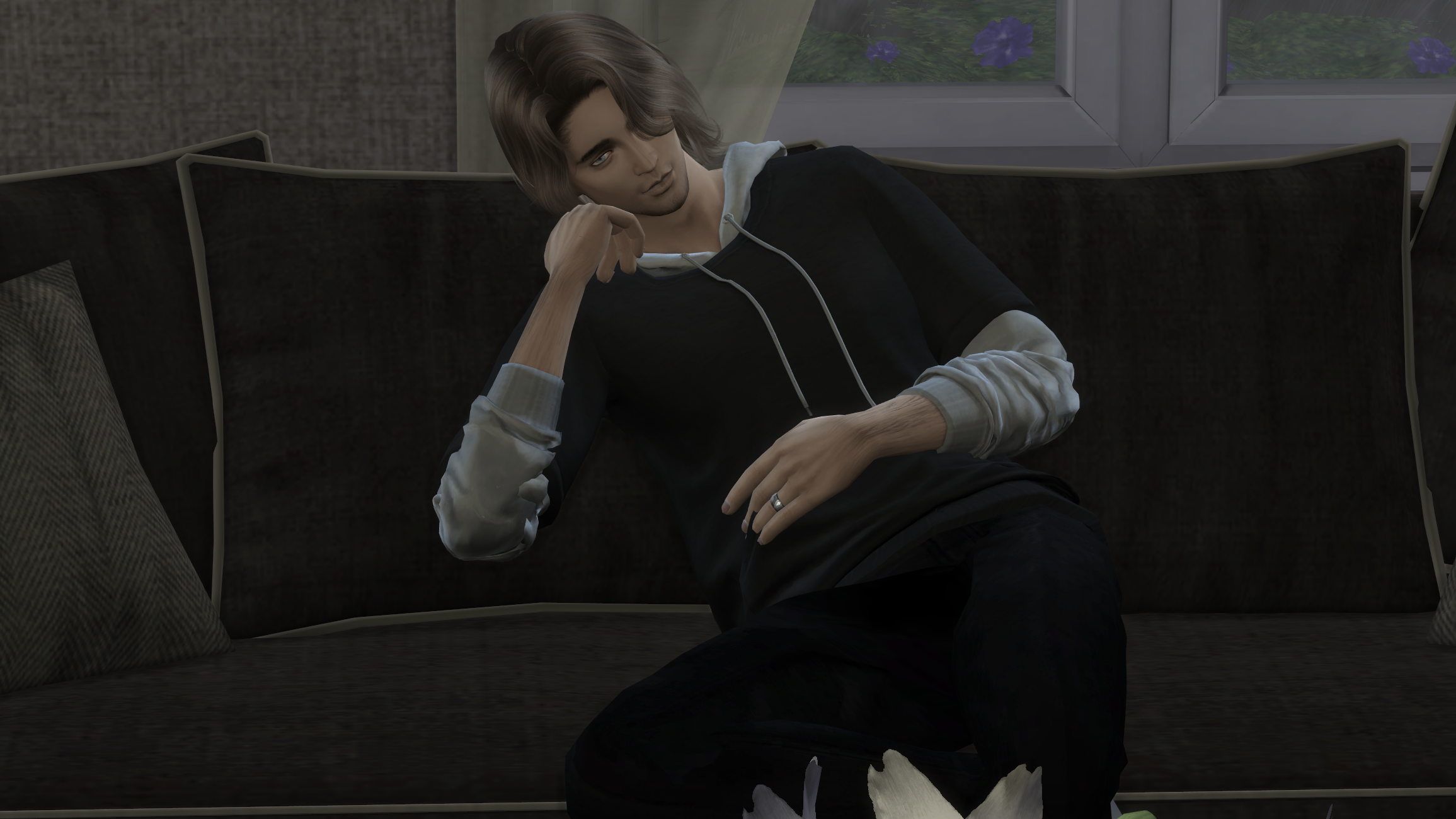 Blake dreaded the idea that one day he’s come home and she had cut her hair like most of the other moms.

Blake felt guilty thinking all that but couldn’t help it. He felt like he couldn’t breathe … he needed to get out. Grabbing his jacket he peeked into the kitchen where Hailey still frantically typed away on the computer. 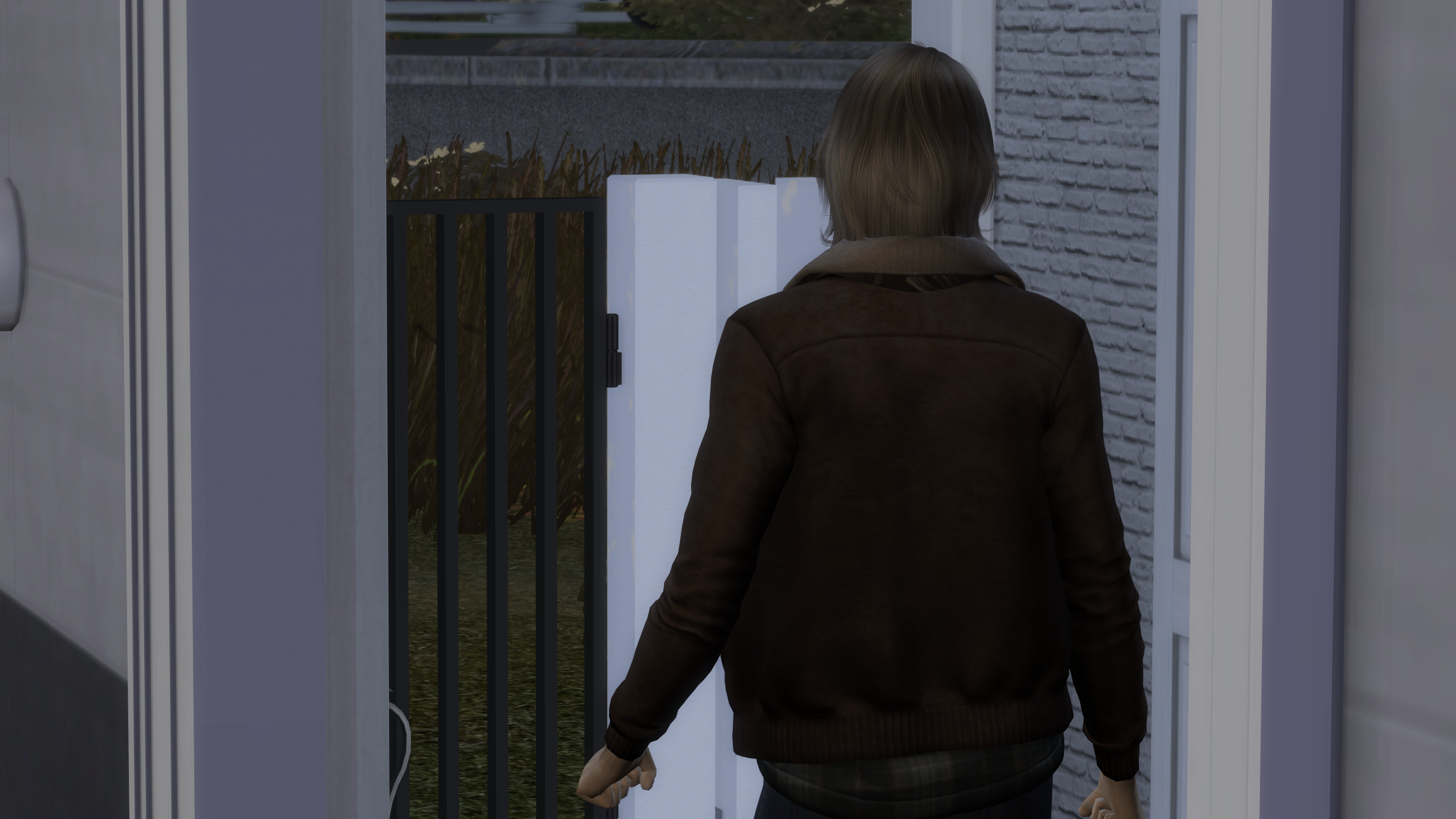 “Hey, I am going out for a bit! Not like you care or anything … ” he called back into the kitchen, never waiting for a response he just took off.

After driving around for a while, he ended up in Windenburg, briefly went to the cemetery and visited his family’s graves but found that only got him more down, so he left the car parked and walked around Windenburg aimlessly. 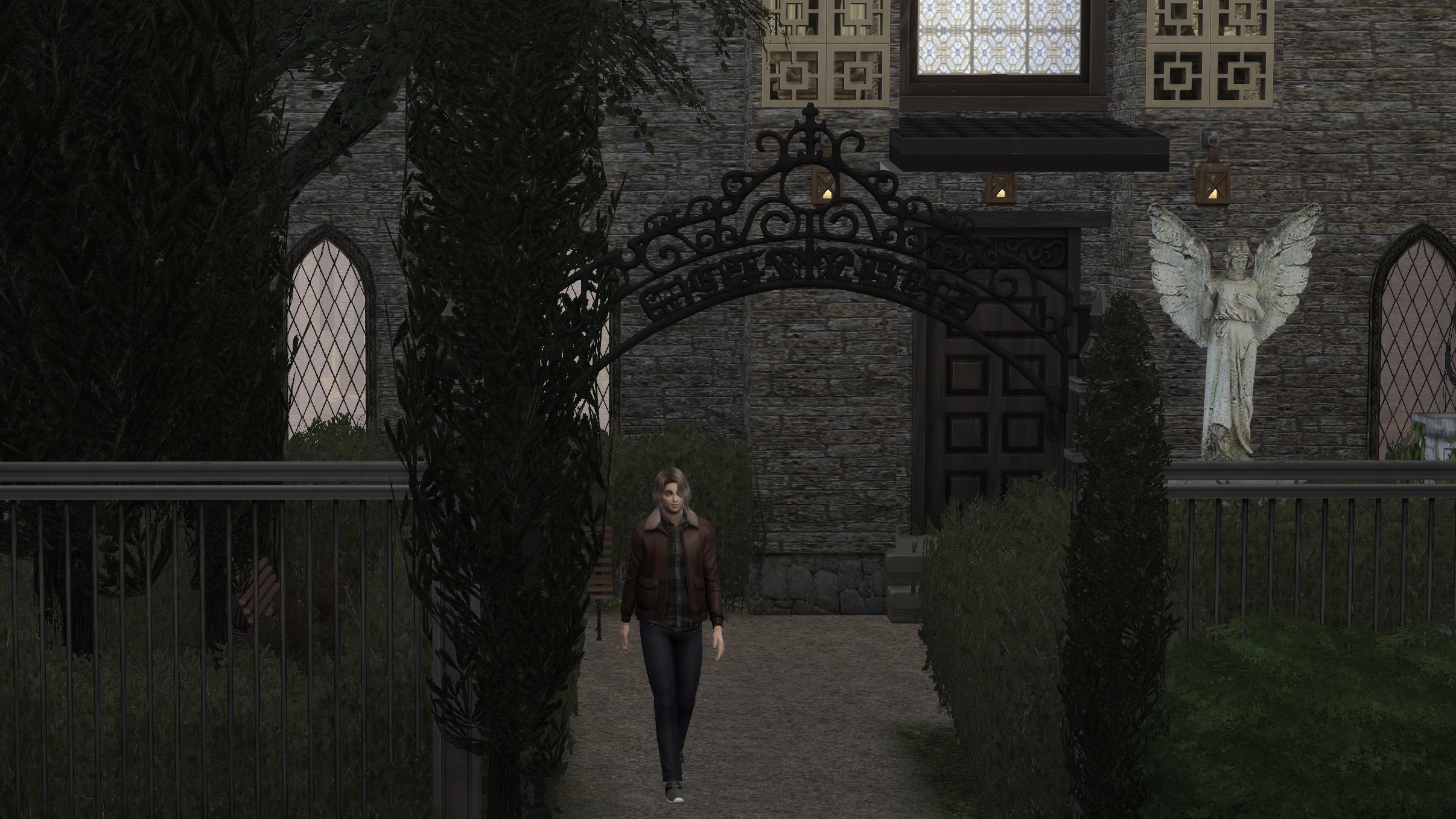 He passed some of their old hiding spots, saw her old cabin where they had spent high and low moments. 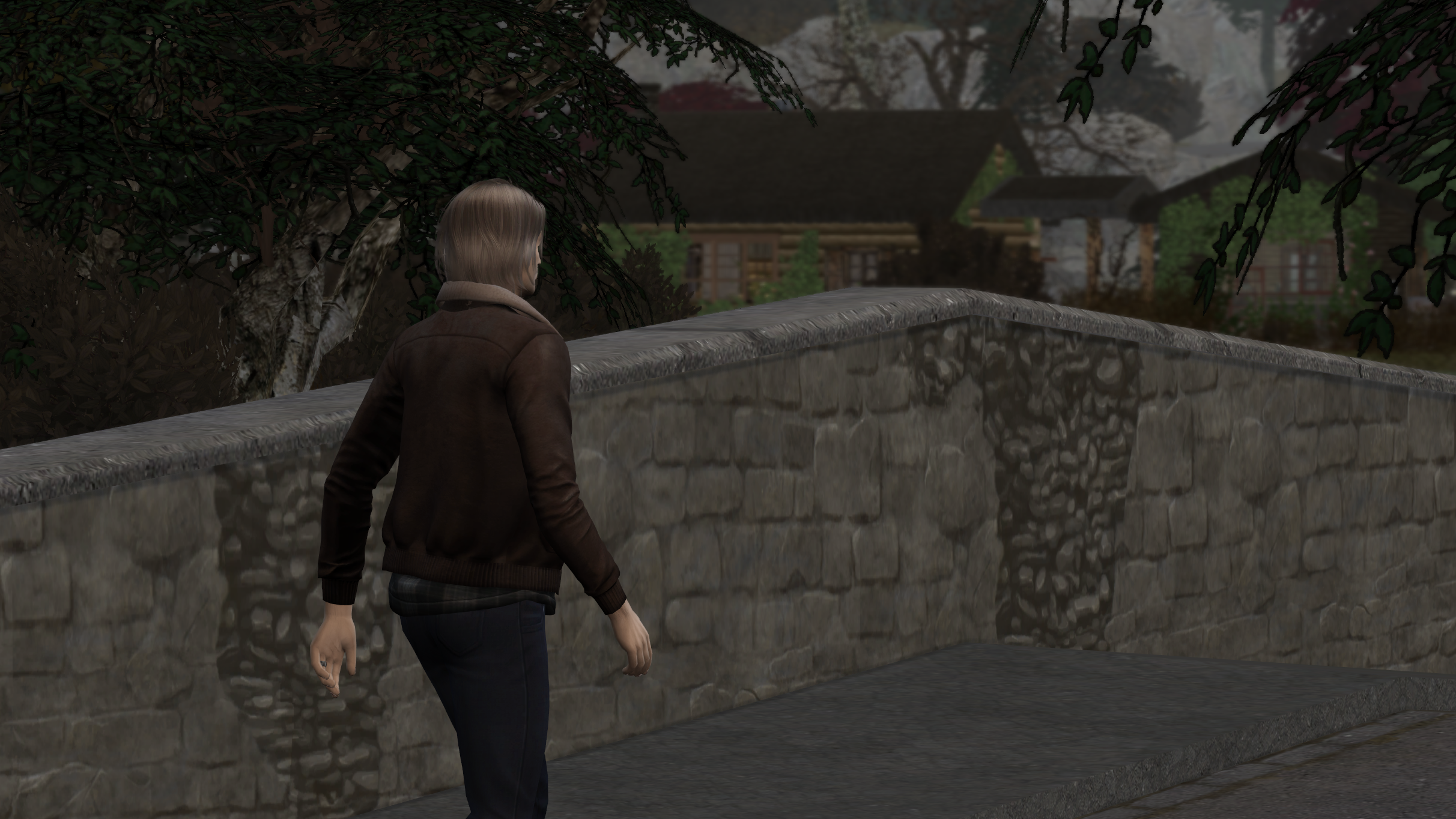 All the way into town.
Looking around for places to go without tourists or the chance of running into familiar faces, he decided on a bar. 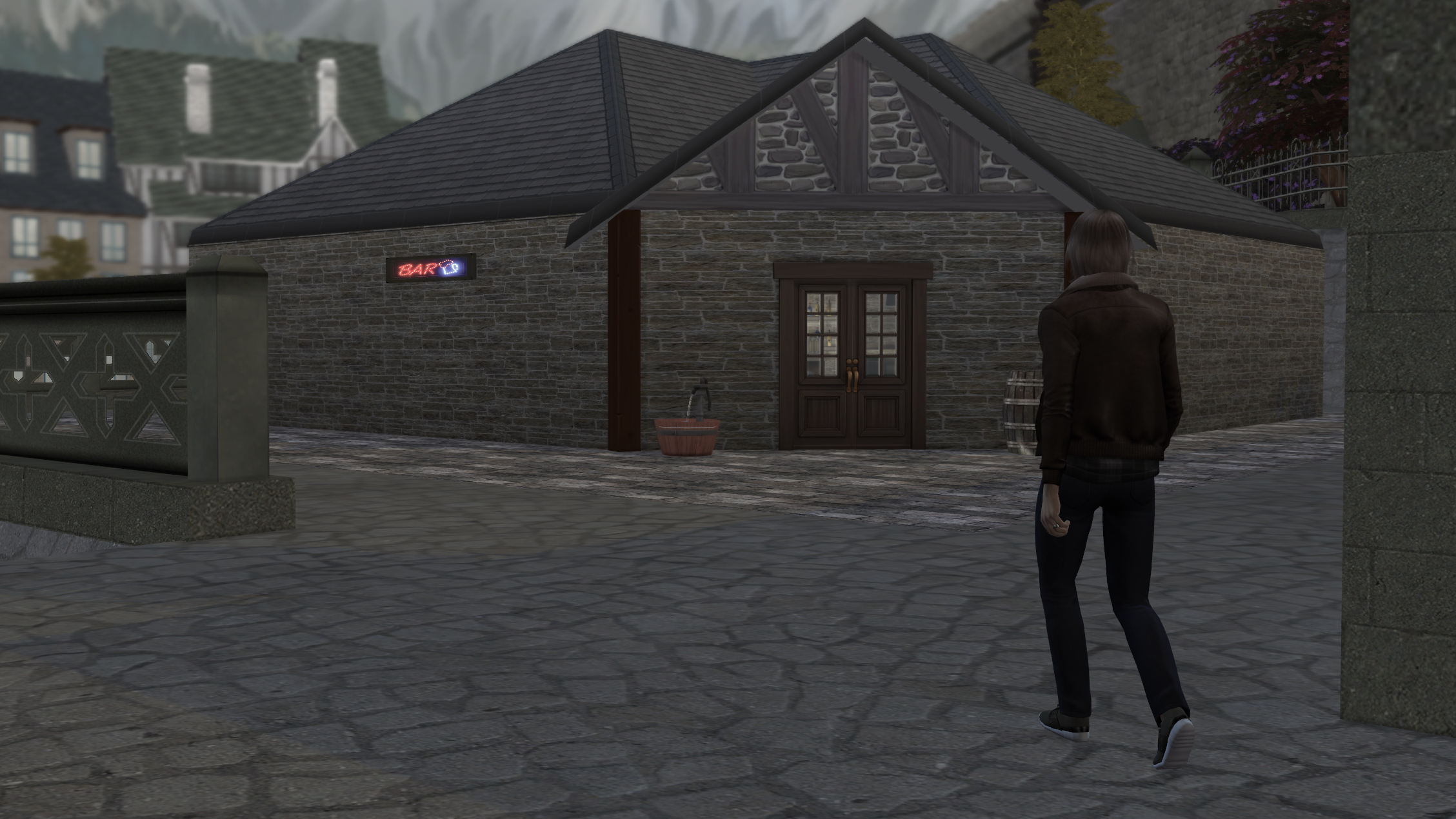 2 PM on a weekday was not really a busy time here, so he had almost the entire place to himself.

He sat down at the bar, ordered a beer, then stared into it like it were a crystal ball. 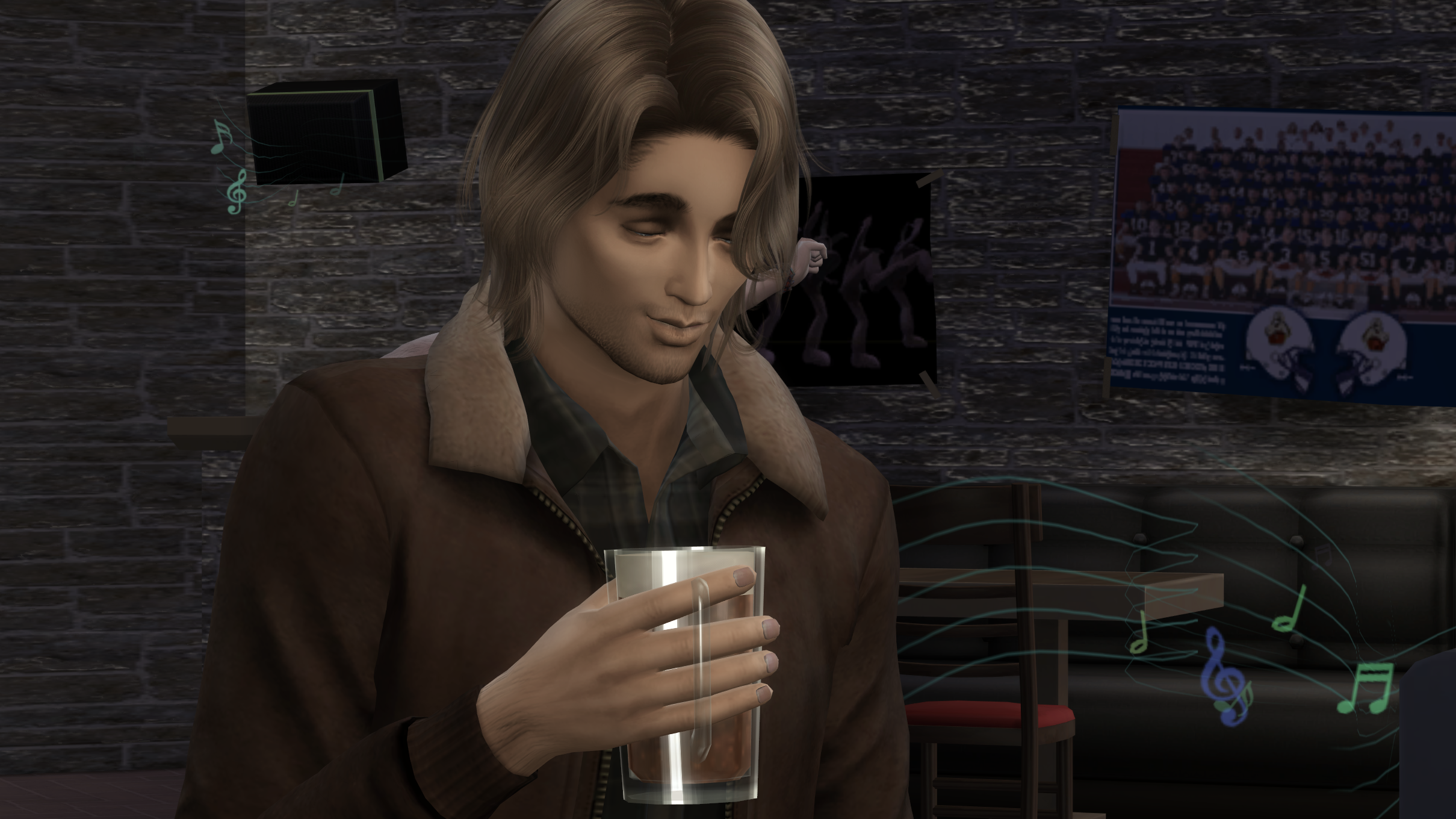 Later he could not say for how long he had been sitting there like that, when he heard a female voice next to him

“Is this seat taken?”

Blake shook his head and the person sat, he heard her order something, but paid no attention, only wondered why she chose to sit next to him when almost the entire bar was still empty.

“What brings you here on a random weekday?” she asked him. 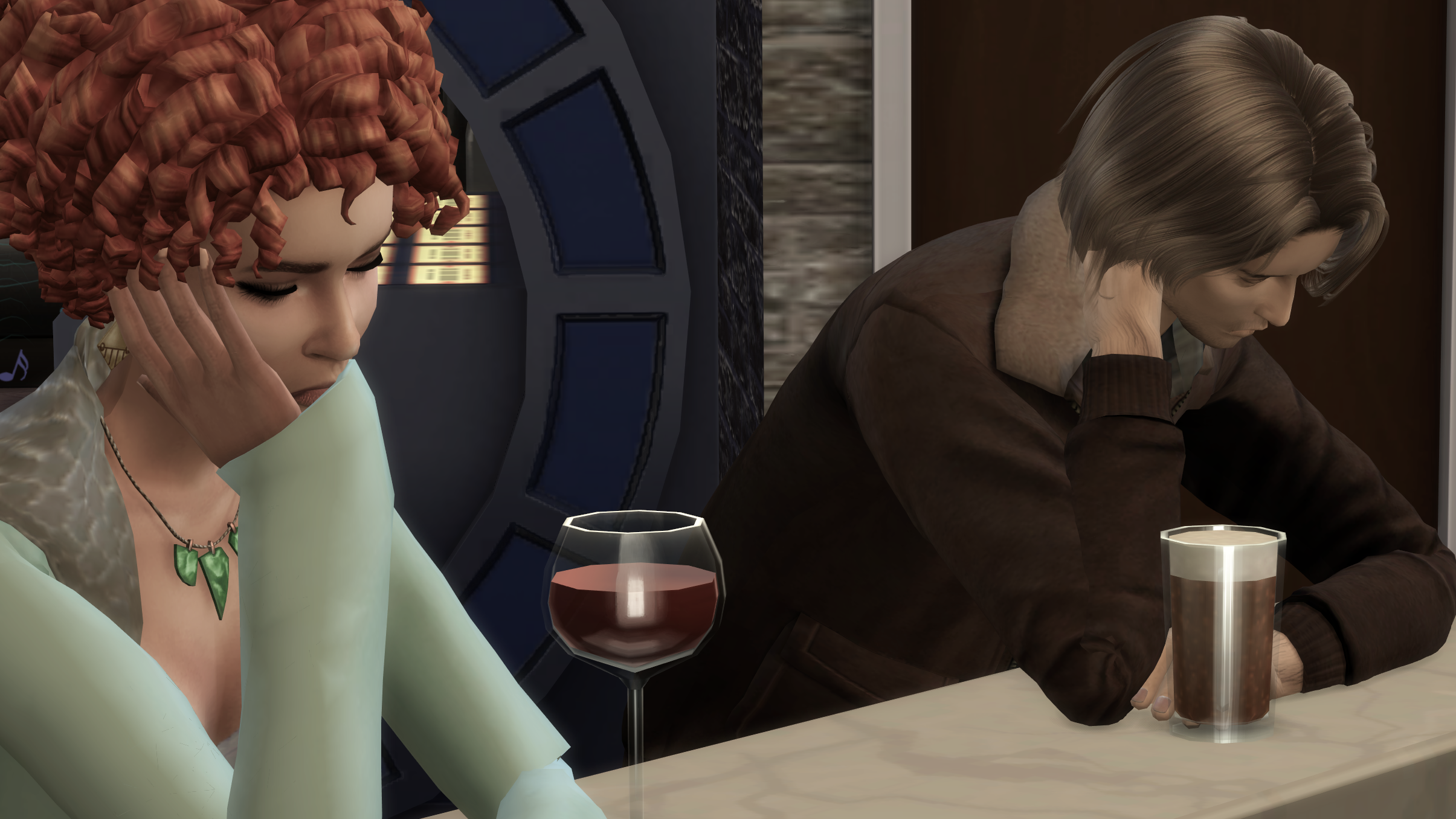 “My WIFE wanted some peace and quiet, so I skedaddled.” Blake replied, purposely over-enunciating the term ‘wife’ as a hint and to dissuade her from anything else.

“Ah, what a good hubby you are. I am not married. No way I would want to get stuck like that.” she babbled on. 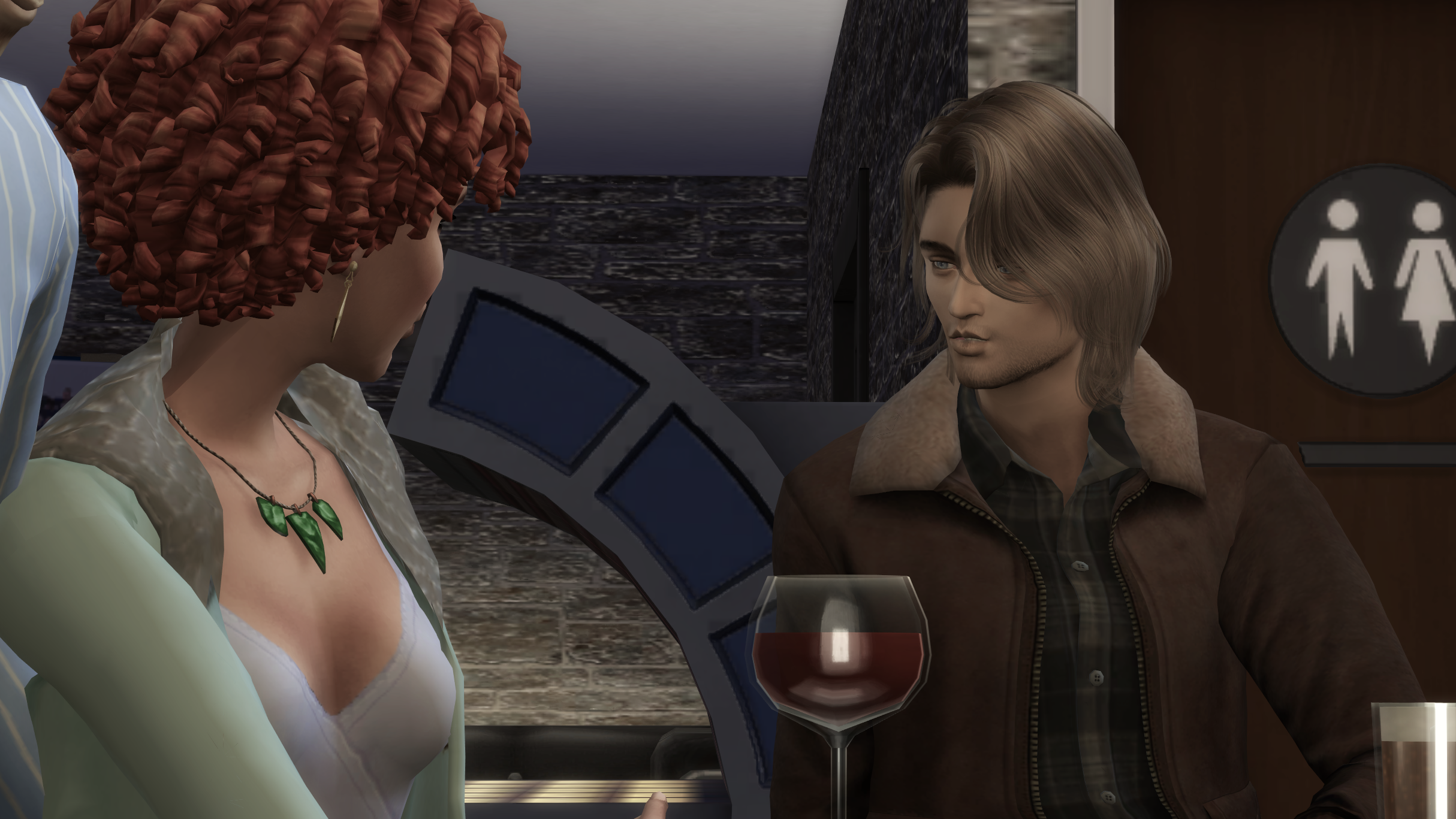 Blake took a hefty sip. No way was he going to go there. He may feel stuck, but not enough to want to risk everything for a one night stand.
He loved his family.
Just not the way his life was currently spinning its wheels.

“Not very talkative, huh?” she went on. 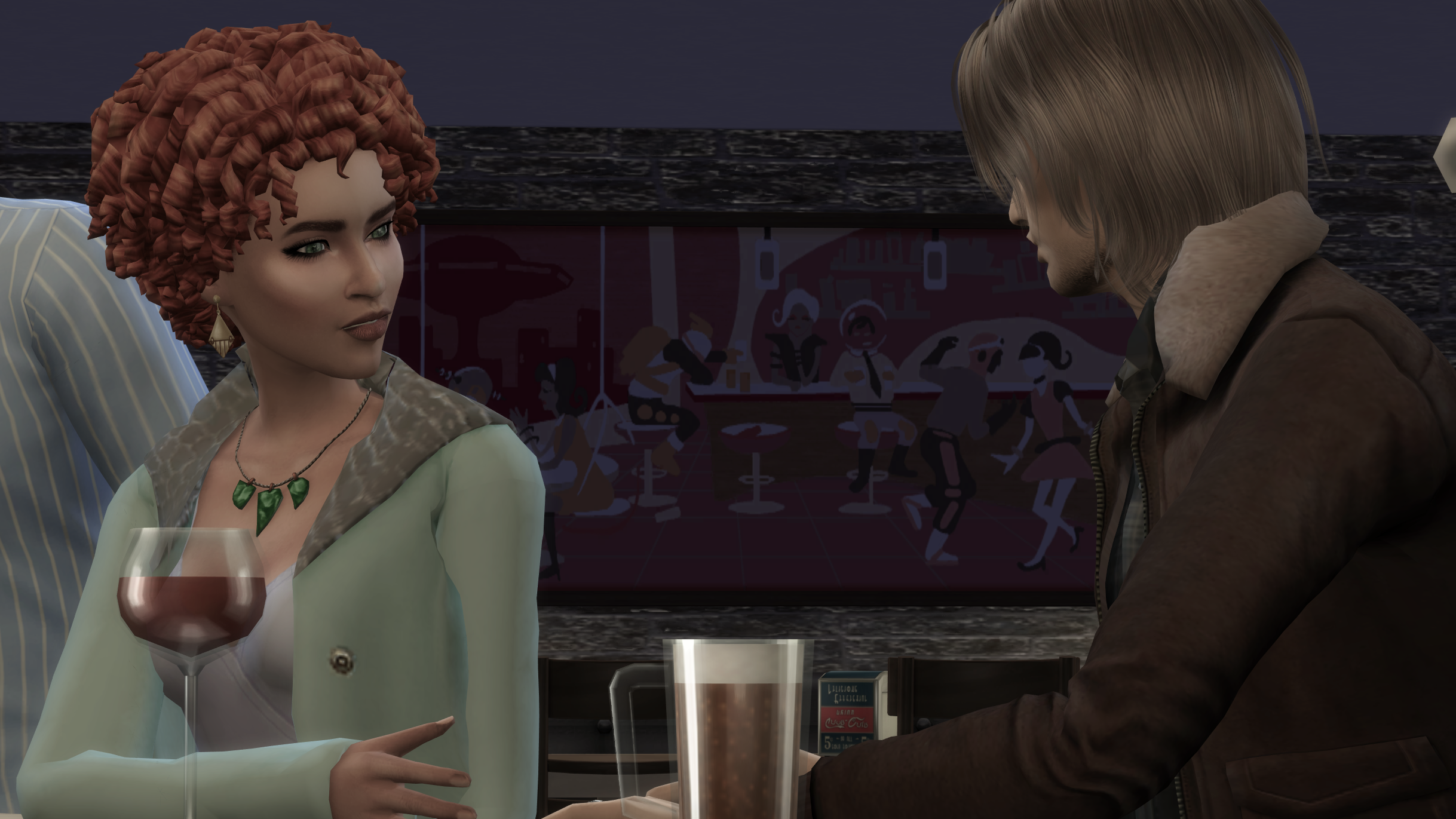 “Nope, not really.” Blake replied thinking ‘take a hint’, wondering if she recognized him and was some fan trying to get his attention. There used to be a time this happened a lot, but after staying off the radar, hardly anybody remembered him in public.

He finished his beer, paid and left. 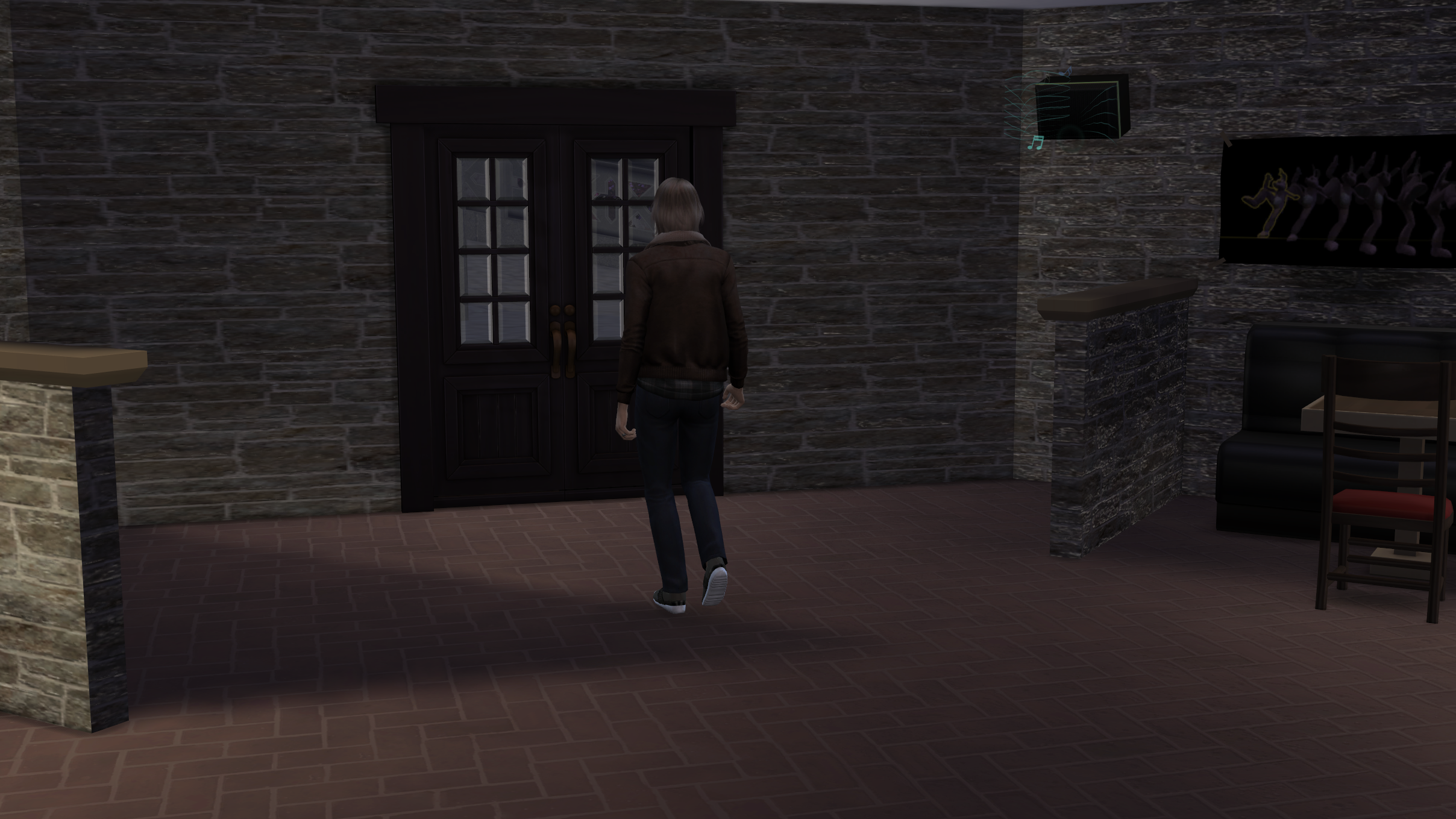 He barely made it outside the bar, wondering where to go next when he heard her voice again behind him. 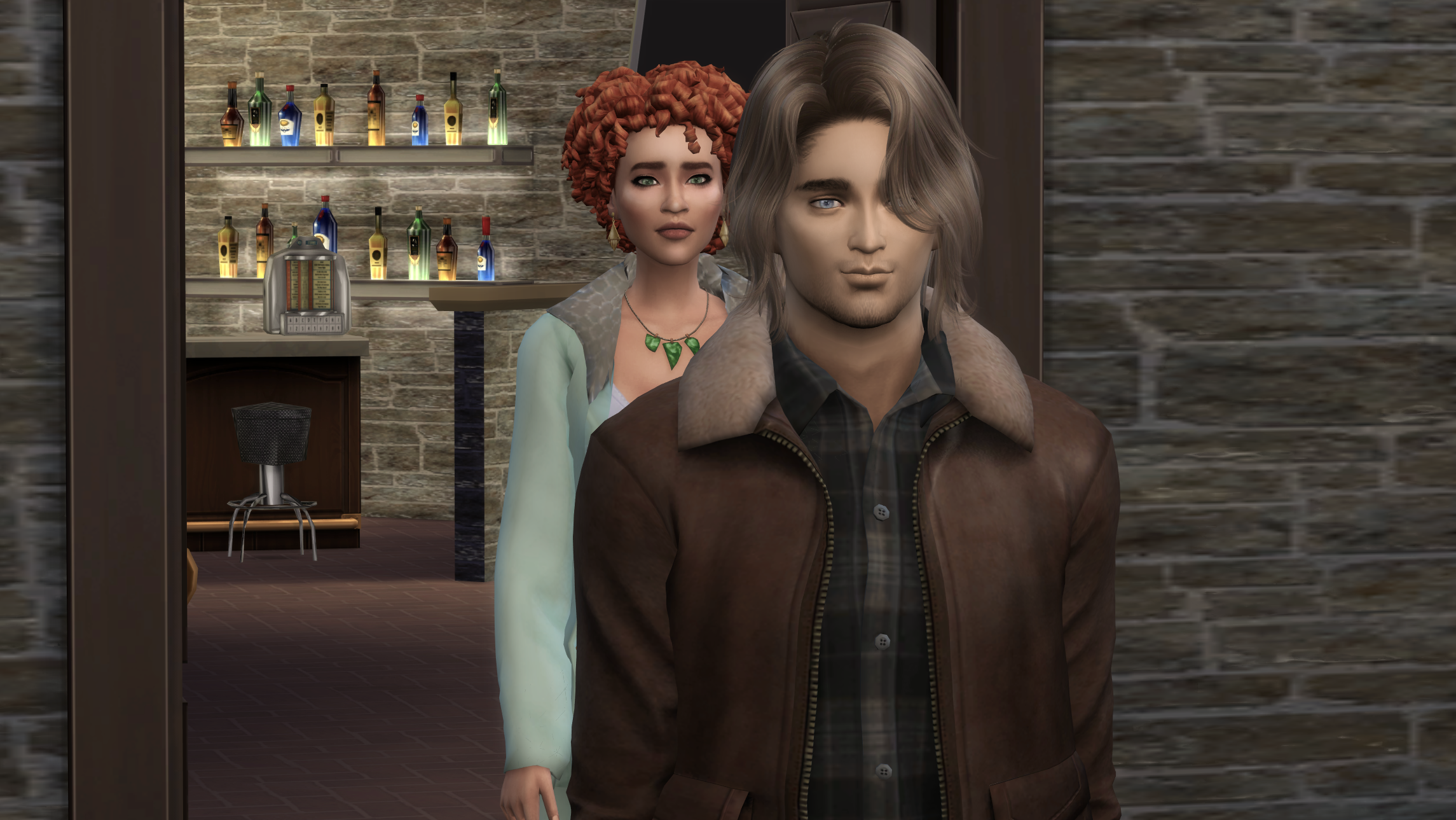 “Hello again, I was wondering if you could help me? See, I am not from around here and truth be told, utterly lost. I have a map in the car, but you know, females and maps, right. Would you take a look and point me in the right direction?” the woman again. 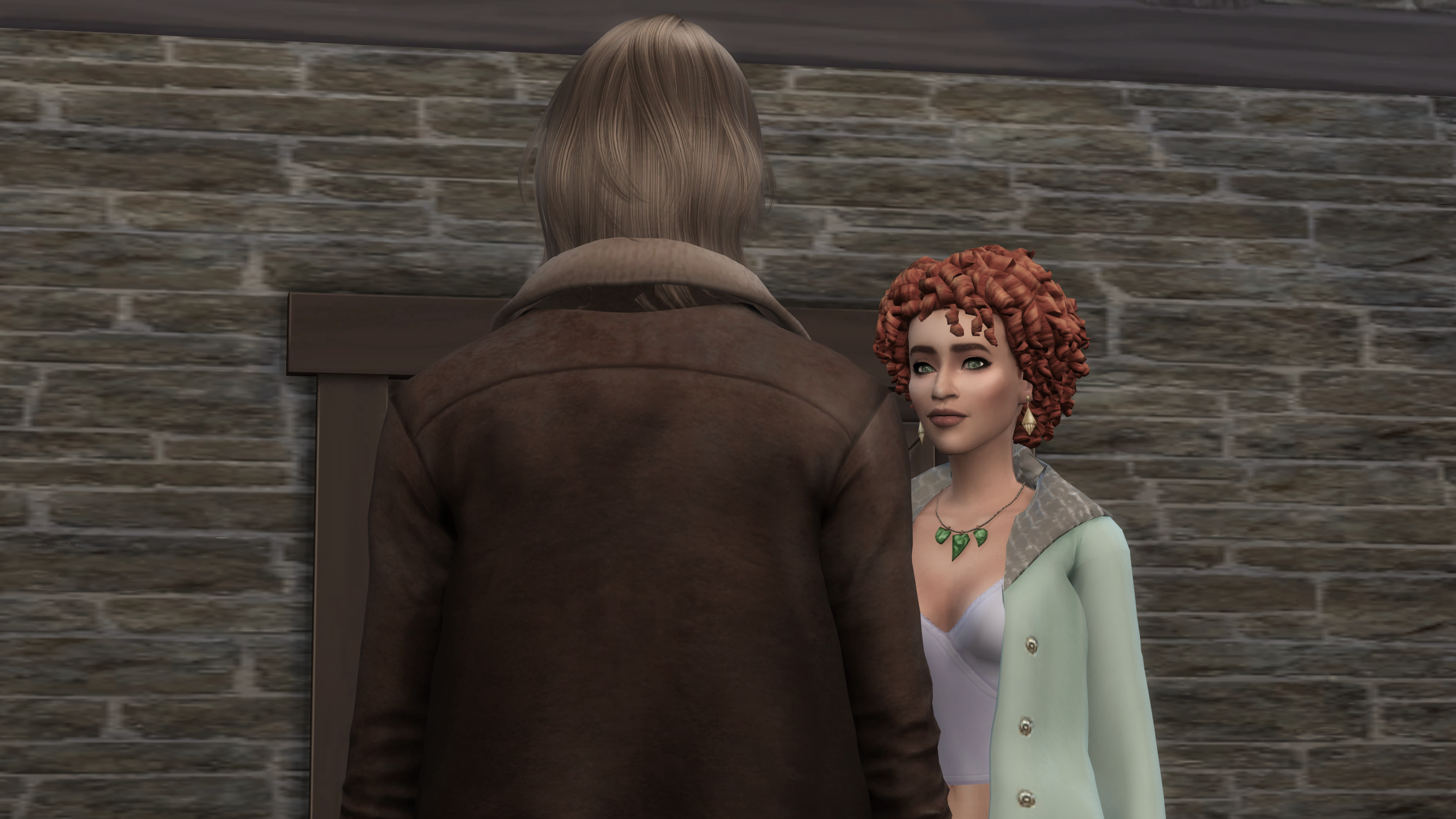 ‘What a lame attempt of hitting on someone…’ Blake thought, but agreed anyway.

For one to be able to call her bluff and nip this – whatever it was – in the bud, but also just on the off chance she was telling the truth and needed help.
He knew Windenburg like the back of his hand and giving someone driving directions didn’t cost anything. 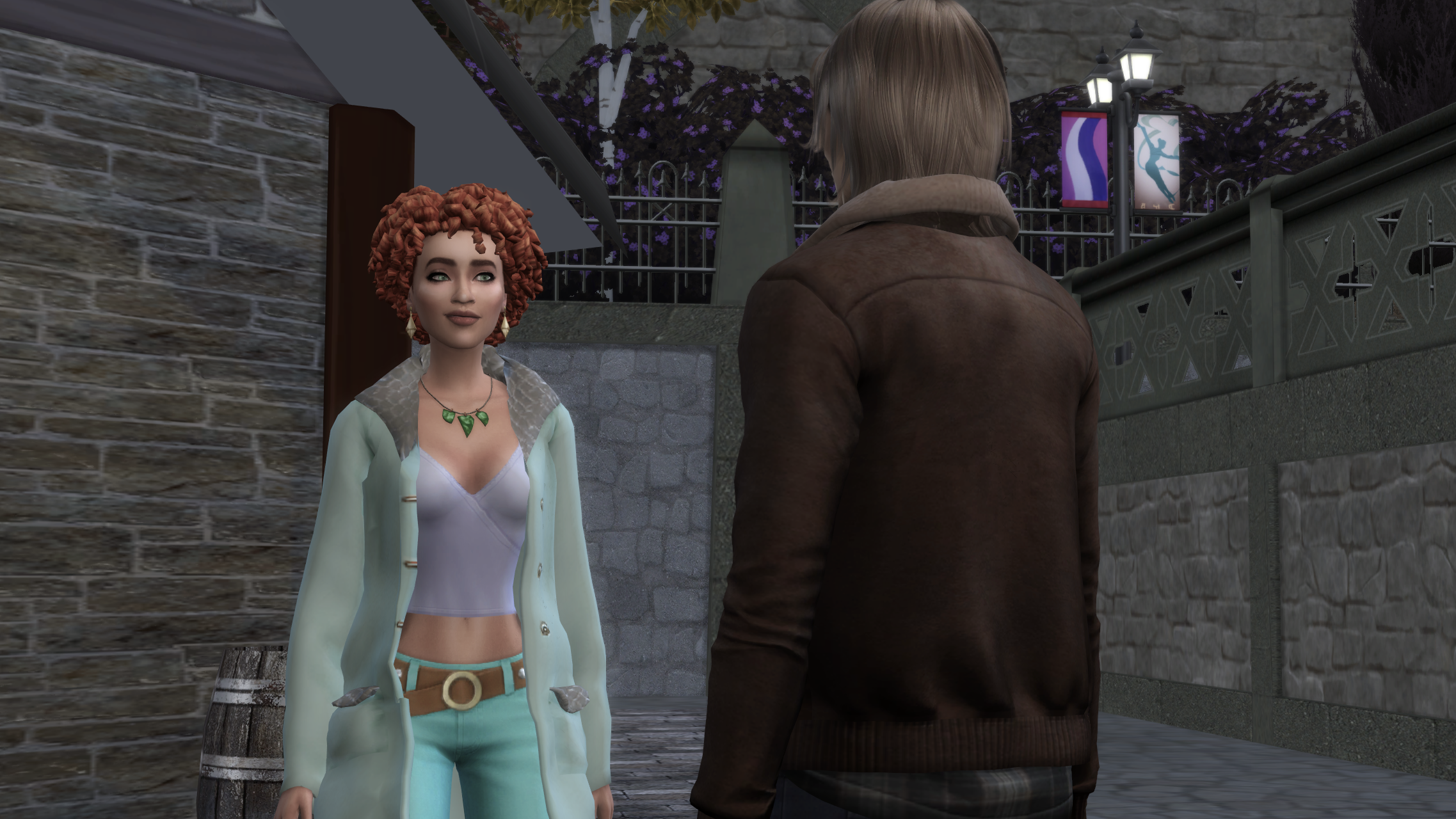 He followed her to a quiet corner where there really was a car, a rental by the looks of it, she really did pull out a map unfolding it. She had various questions, pointing here and there. 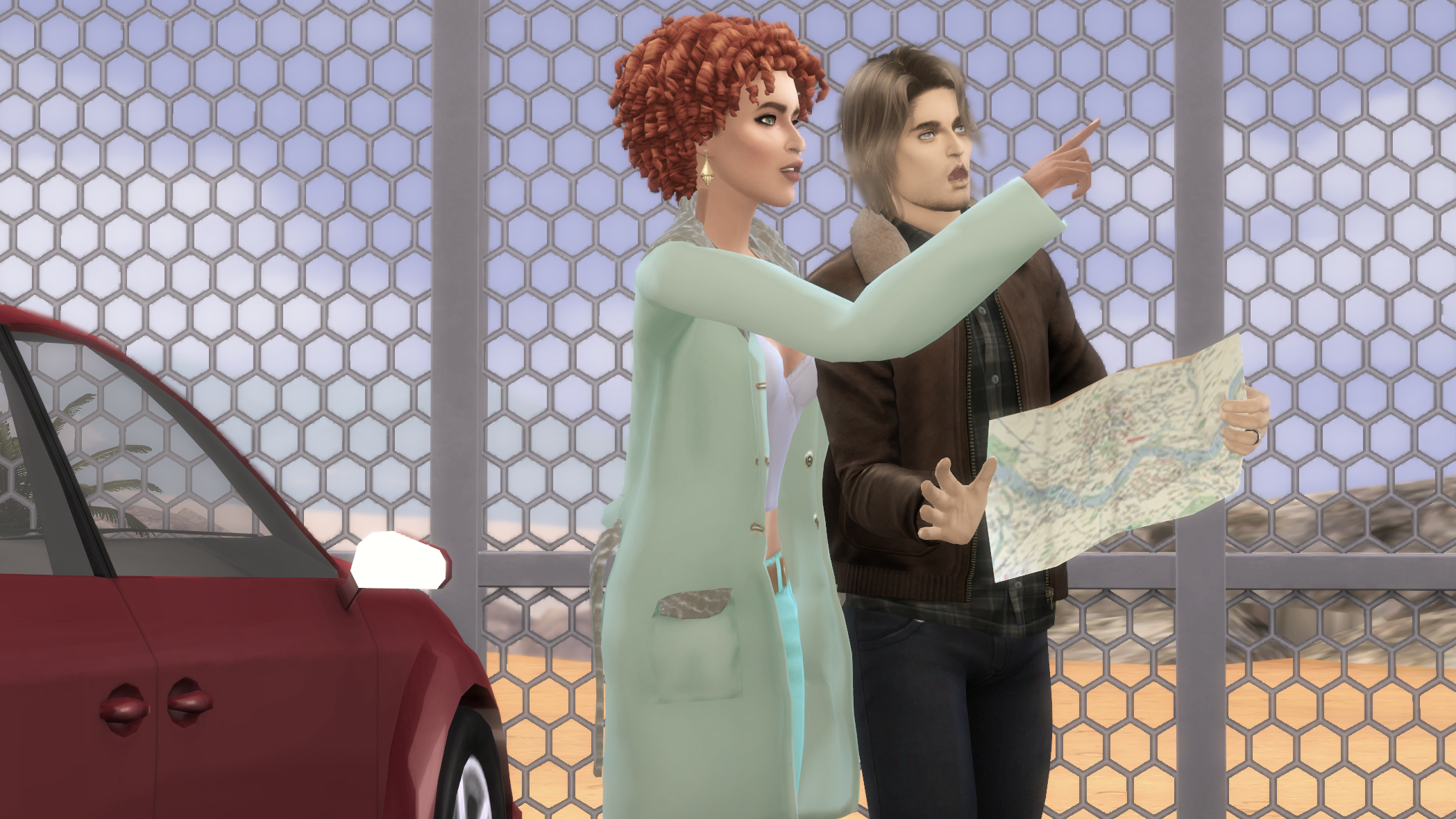 He could feel her behind him, but couldn’t see what she was doing, too busy figuring out the best route to describe to her. 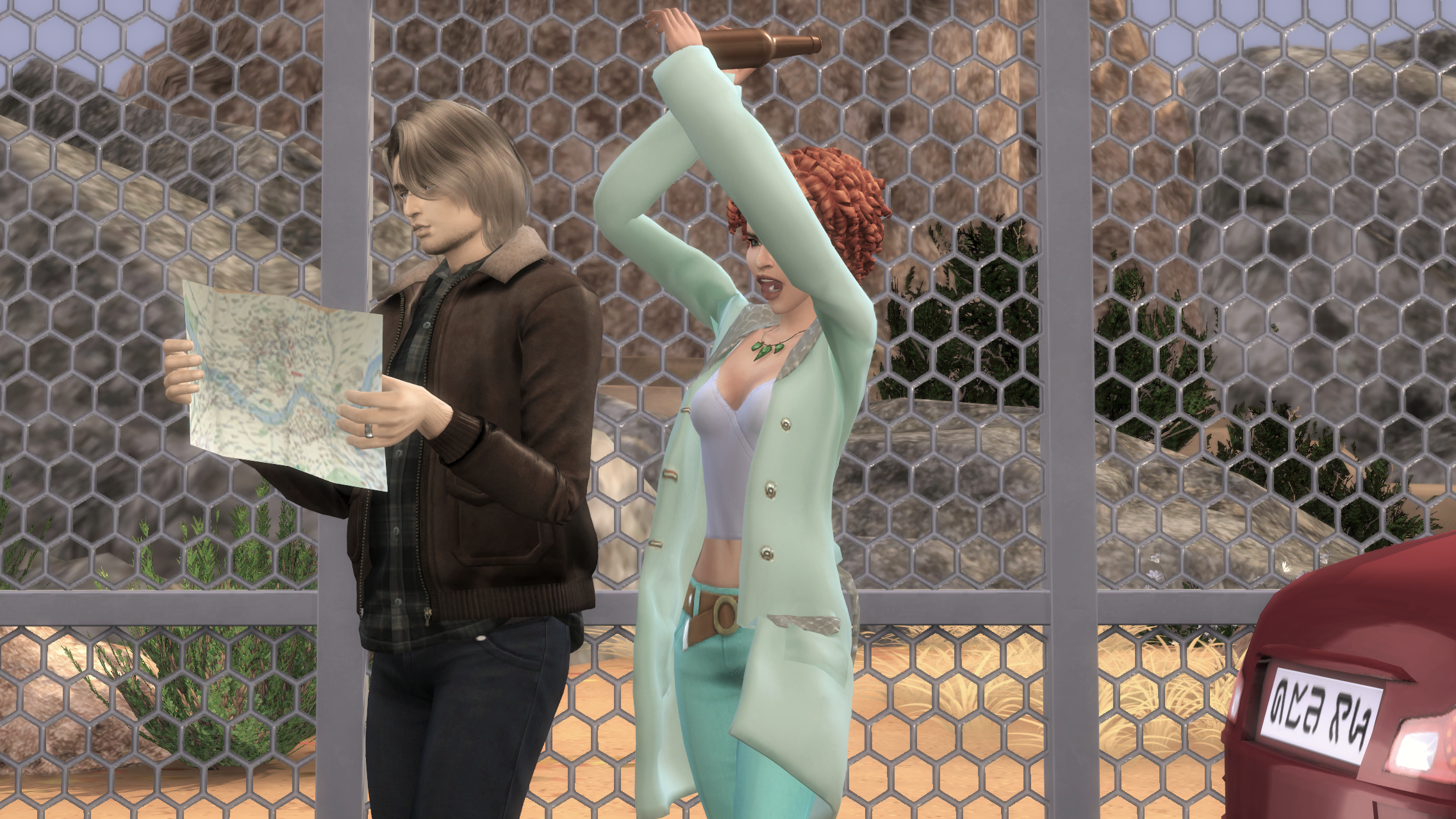 The last thing he felt was a painful hit on his head before all went dark. 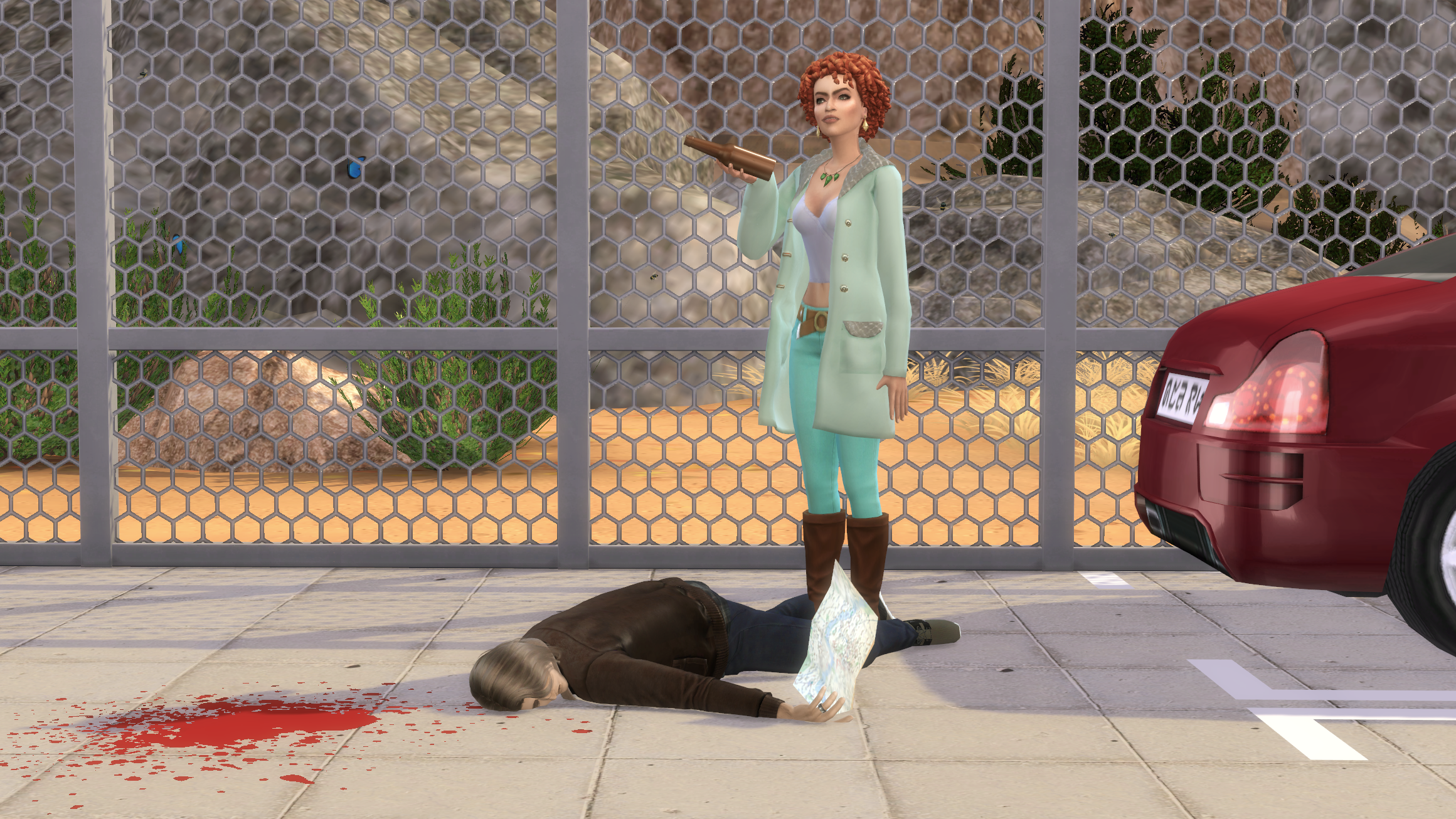