This chapter is the epilogue for Generation 4. No worries, KC and Everleigh will continue to be heavily featured as well the other Camerons.

Josh was laughing heartily
“Maybe Em and I can give you some advice on parenting with your rowdy kids. Ours brings home good grades and barely knows what the principal looks like, as do we.”

“You are not as funny as you think, Josh.” Everleigh was not amused in the slightest.

“Careful making her mad, where do you think the kids get all that temper…” KC quipped.

“You telling me? I grew up under the iron fist of her.” Josh joked, with everybody aware that he and his older sister Everleigh always had a very good relationship, mostly due to the 7 year age difference.

“It really is not a joking matter! I have always been disgusted by parents who have brutal kids and now I am one – kinda. And the girl, at only 13 years of age, not even the boy. Dances ballet like an angel, then goes UFC in her spare time. I really cannot make heads and tails of it. The worst thing is, her intentions are good and I understand why she does it, but still have to reprimand her. We are meeting the parents of that bully kid tomorrow. They seemed like totally nice people on the phone, not the white trash I expected.” Everleigh said.

“Hey, no need to bring my family into this… haahahahaha” KC laughed, referring to his bad childhood in a run-down trailer park with very uncaring, abusive, alcoholic and drug-addicted parents.

At the same time Ethan and Cole were in his room playing a video game together with Ezzy just hanging out when she looked up.

“Uh Cole? Why in the world do you have a picture of Benny up on your wall?”
“I dunno.” he replied, distracted.

“You know him?” Esmée inquired further.
“Duh, sis. Think he has Selfies with strangers on his wall?!” Ethan told her.

“He’s in a few of my classes. Turns out we have stuff in common. We kinda became buddies. How do you know him?” Cole responded now.
“She beat up some kid for him. Twice and counting.” Ethan grinned.
“HUH?!” Cole looked at Ethan, then Esmée, very surprised.
“Nothing, Ethan forgot to take his meds.” Ezzy tried to avoid that sore subject.

“No, you need to hear this, Cole. And tomorrow my parents and she are going to meet at this dude’s house with his parents.”
Esmée rolled her eyes as her brother told the tale, heavily embellished of course, making her sound more like a Lara Croft with rabies.

“I do not know what has gotten into Forrest. He is a smart boy, a good kid too. I still think this must be a misunderstanding of some sort.” Mrs. Gray said, visibly uncomfortable.

“Yeah, right. Because I am ‘only’ 13 I only imagine him picking on weaker kids.”

“I only beat his ass because he and his family are assholes!” Forrest now said shrugging.

“FORREST! What is wrong with you, boy! Go to your room! NOW! Your mother and I will be dealing with you later! I am so very sorry about this!” his father addressed him firmly.
Forrest made no efforts to budge, rolled his eyes instead.

“I apologize for him. He has changed so suddenly. Ever since my husband Phillip lost his job. We are fine now. Not great, but okay. I had to pick up a side-job for a while. We had promised him we wouldn’t move, but Phillip got this great job offer in San Myshuno, so we just had to. He hated having to leave all his friends behind. Ever since the move I hardly recognize my son. I really hope he comes around soon.” Kaila Gray told the Camerons.

“No need, it would appear that we are in the same boat with our daughter these days. She has never been unruly and a brat like this before.” Everleigh responded.

“Maybe buy him a muzzle and a brain with your next paycheck…” Esmée now addressed the Grays, causing her parents to stare at her in utter disbelief. 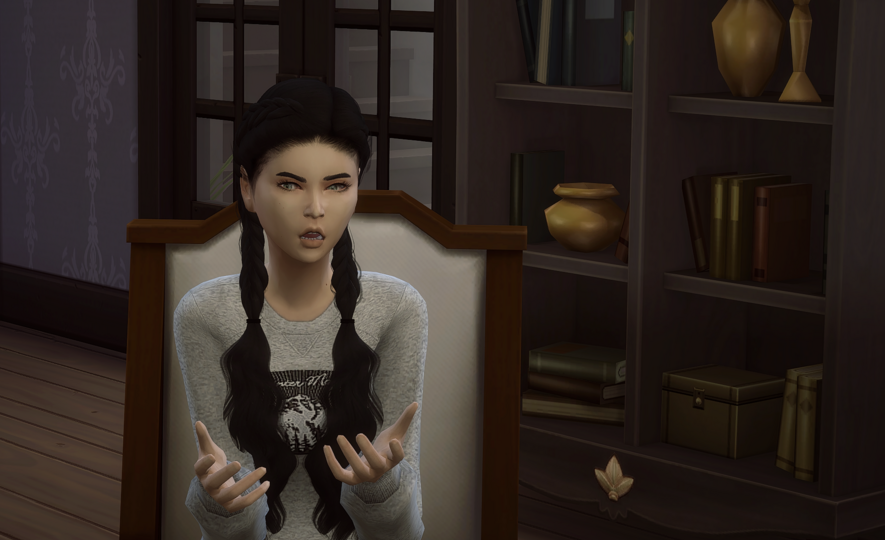 “Esmée! You come outside with me right now!” Everleigh jumped up and dragged her daughter with her undoubtedly to reprimand her, while Mrs. Gray dragged her son out of the room.

“Sorry, about that. She really is not like this normally. Dances ballet and all that. Smart kid.” KC offered to Phillip Gray.

“Ah, kids, what can you do. Hormones can be a beast. Between you and I, I have a feeling I know why Forrest is so … unruly. That kid he – uh – has that problem with is the grandson of the man I used to work for. His son ran the company and when his wife died so suddenly, he just shut down the business without warning. A small severance is all I got and that was that. Guess my son blames that kid indirectly.” Phillip Gray told him as his wife joined them again, with an apologetic smile.

As Ezzy was headed to her parents’ car she looked up and saw Forrest by the upstairs window.

She offered two thumbs down at him.

To which he responded with a double one finger salute.

“Whoa! I had no idea THIS was uphill from grandma and grandpa’s!” Ezzy was shocked.
“I did.” Ethan shrugged.
“Are you coming?” Cole pressed on.

Cole rang the doorbell, they were all beckoned inside by a butler who evidently knew Cole and left the kids to their own devices, as Cole lead the way through impressive hallways, up the stairs and to a door, where he knocked, then just entered.

“If you got your schlong in your hand, drop it now, got a girl with me!” Cole joked as he walked into the room, where Benny was playing a video game, but jumped up surprised and blushed when he saw Esmée.
“Uh – you didn’t mention you’d bring others…”

“Sorry, is that cool? If not, you can leave, we’ll be fine. Hahaha.” Cole told him. He was only shy with strangers. If he knew you and liked you, he was a hoot and could be very outgoing.

“We can leave again.” Esmée offered. Coming here hadn’t been her idea of fun anyway.
“NO! No, don’t go. I … do you guys want something to drink?” Benny said quickly.
“Is that Game of Wars 5?” Ethan pointed at the paused game on the screen.
“Yeah.” Benny confirmed.
“I need to play that!” Ethan insisted, already on his way to the console.
“ME TOO!” Cole agreed.
“I’d like something to drink…” Ezzy said hoping to get away from all this.
“Ok, you two can just continue the game, I’ll show you to the kitchen, Esmée. Or do you prefer Ezzy?” Benny said nervously as he lead the way.

“Ezzy’s fine. Most people get so confused about the pronunciation anyway. It’s pronounces Ez-may, but the ‘may’ is very soft, more a ‘meh’ sound.”
“I’ll remember that!” Benny affirmed quickly.
They had reached the kitchen, but unlike Esmée had hoped, Benny didn’t leave, instead stayed staring at her drink her water, making her uncomfortable, so that she felt obligated to force out small talk with him.
“Man, is everything in this house huge? This is like a palace.” she forced a faint smile.
“Want a tour?” he offered right away.
“Sure.” Ezzy was impressed by this house, as the daughter, niece and granddaughter of architects she had seen many different styles of houses of any size, but never anything like this. She’d even endure more of Benny to see the rest of this mansion.
Esmée finished her water, then followed Benny through the house, him stumbling and stuttering several times, apparently nervous. It was obvious that he didn’t speak to girls often.

“Do you want to play a video game too or what do you want to do?”
“Not really into gaming as much as my brother and cousin. I am here only because all my friends are busy and if I had stayed home I would have had to help my parents in the shop. I wasn’t feeling that at all today.”
“You are not in any trouble anymore because of me, are you?”
“No, don’t worry about it. My parents are great. They get it, still have to give me heck for it, but they get it.”
“Lucky you. My parents were great, dad worked a lot and was absent, mom was awesome. But then she got sick, cancer, and when she died, dad changed. Grandma and grandpa are great too, but they are … old.”
“Really sorry about that.” Esmée meant it.
“You are really nice. Usually popular kids, especially girls, really don’t like me and are not nice to me at all.”
“I am not popular. I am more what mom and dad call ‘Switzerland’. I like everybody as long as they are nice.”

“Trust me, you are popular. So do you … like … me? Like as in … maybe … we could … possibly be friends? Or friendly? Like say hi in the hallways at school?”
“Sure, why not?” Ezzy didn’t like that conversation at all.
“Maybe we can be friends? I mean real friends?”
“Uh … yeah. Sure. Sounds ….. great. We better go check on my brother and cousin. For all we know they may be making off with your gaming console and games… ” Esmée tried to change the topic. Benny was okay, but friends? Hardly. Cole was about as nerdy as she could take, but him she had grown up with. Benny was just too much for her taste and she felt they had not a thing in common – beyond Cole.

She was more than glad when her brother and cousin eventually went back home.

Still, Benny was more than adamant about trying to be friends with Ezzy, she went along sometimes to not hurt his feelings. He’d often make sure they’d end up with school projects together and such things, which Ezzy took in stride despite her brother’s teasing. 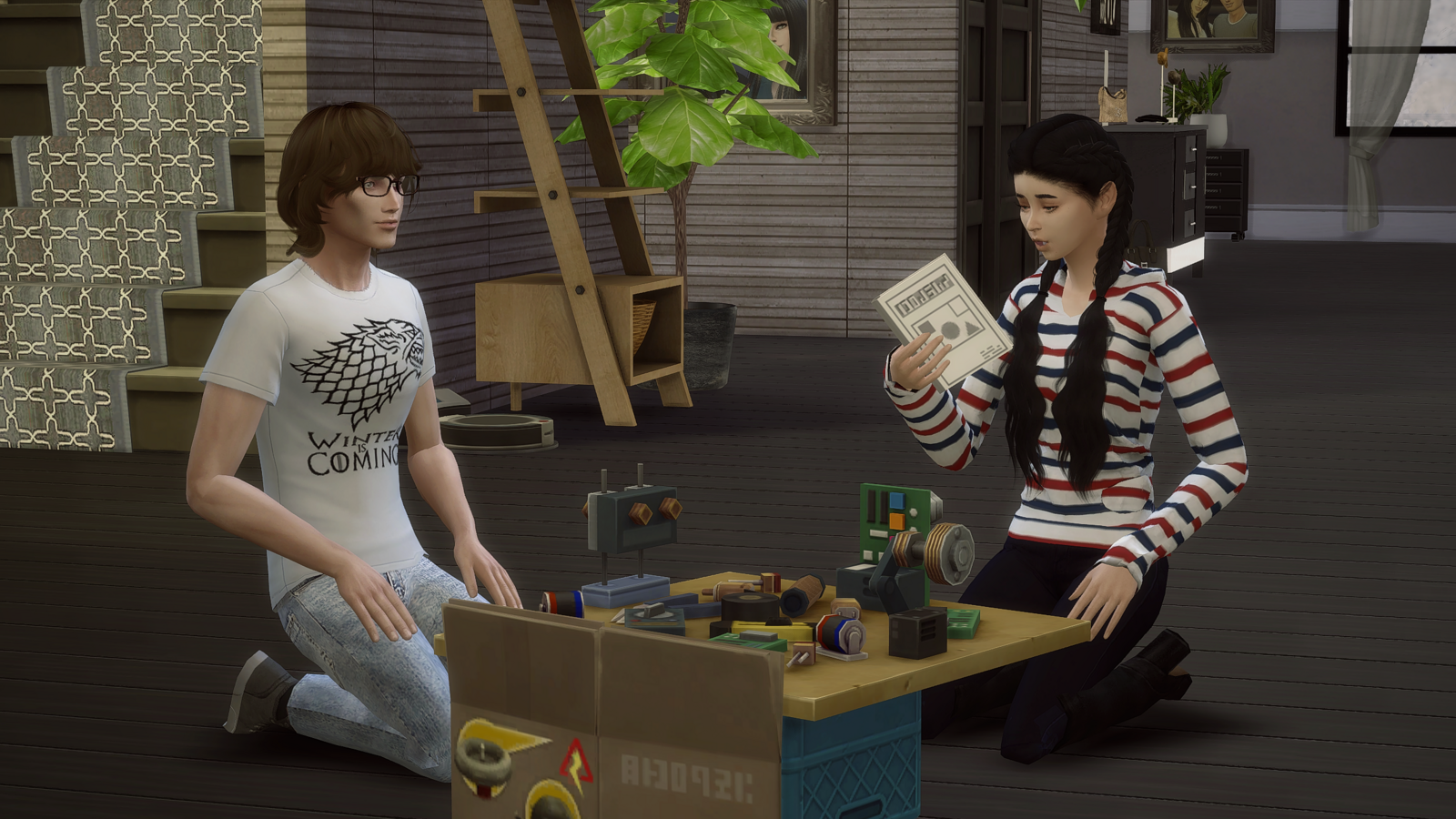 The next months flew by. Abby gave birth to a healthy, bouncing baby boy. 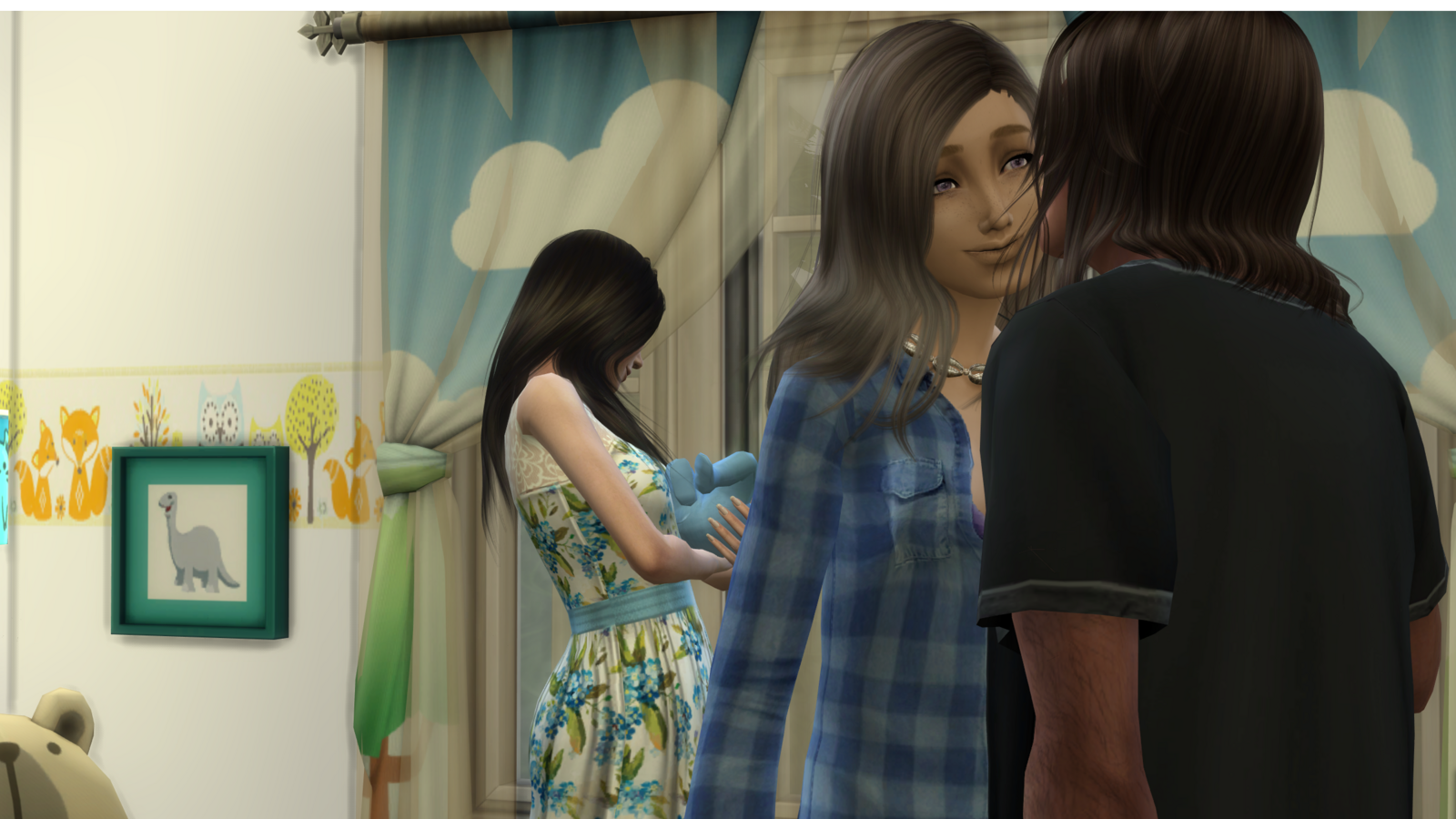 Little Devon Steward made his grandparents very emotional, as for Heath it was the last piece of a puzzle placed to confirm his transition from an outcast misfit to a regular man, a husband and father and now grandfather. 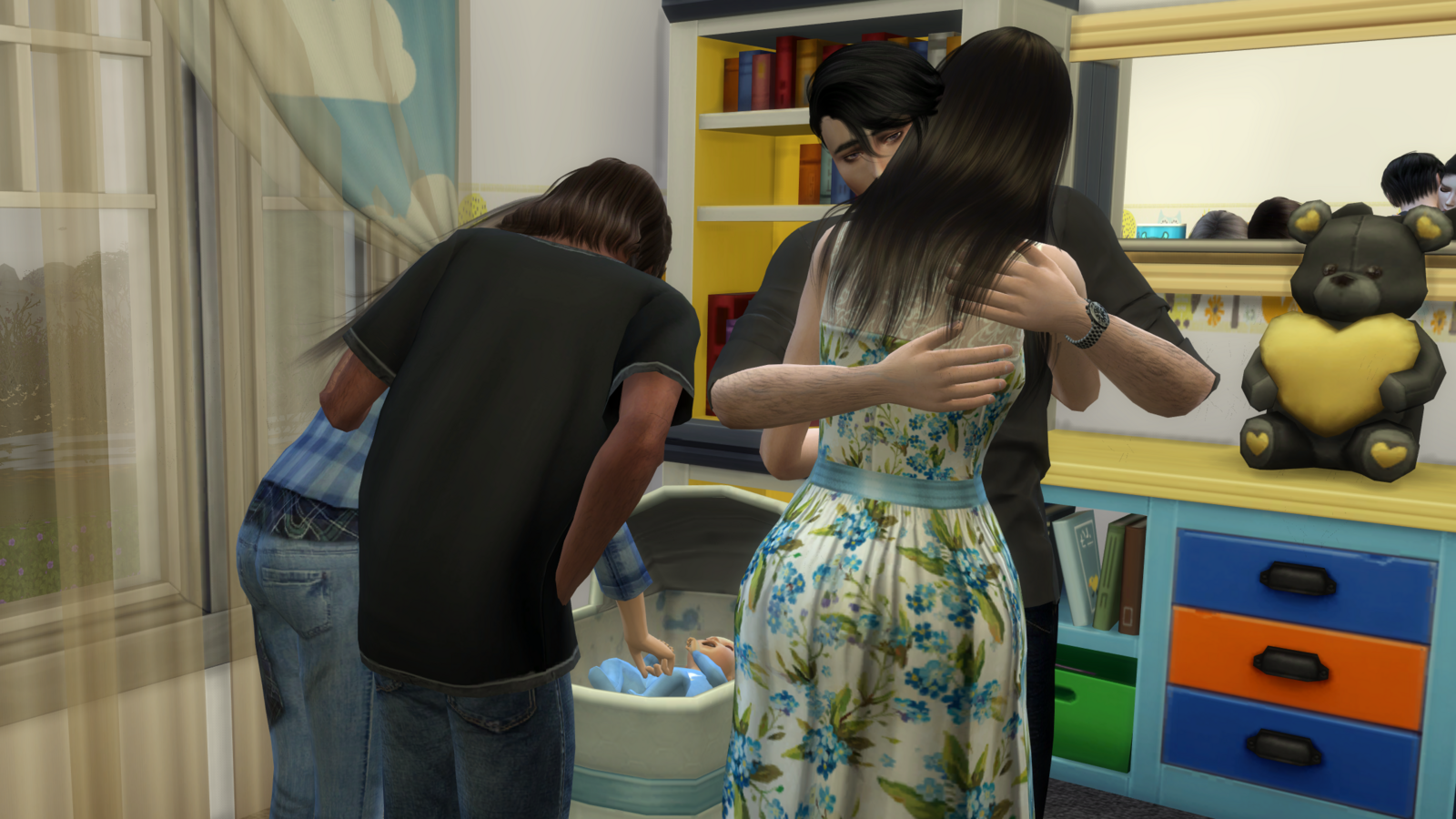 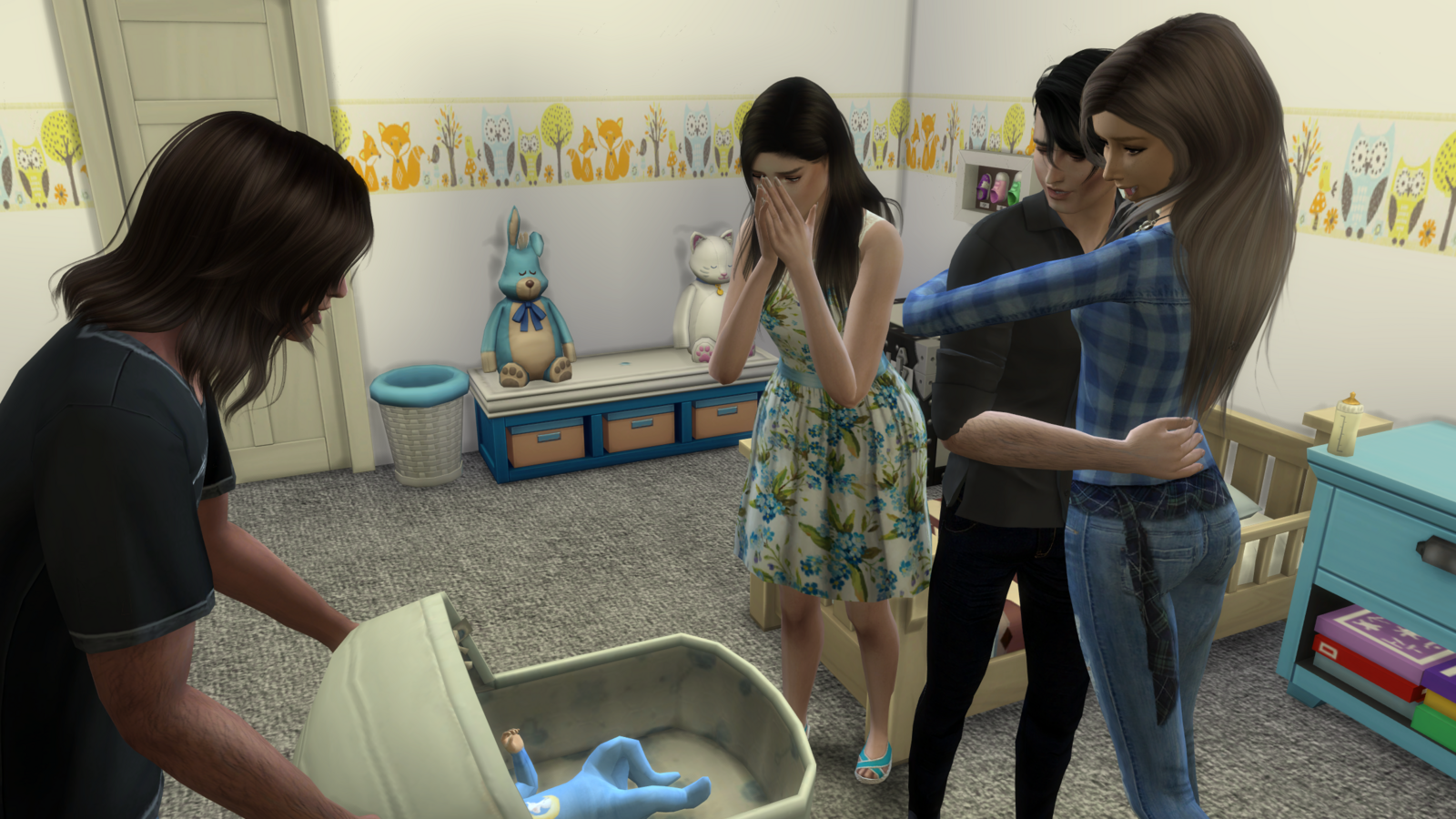 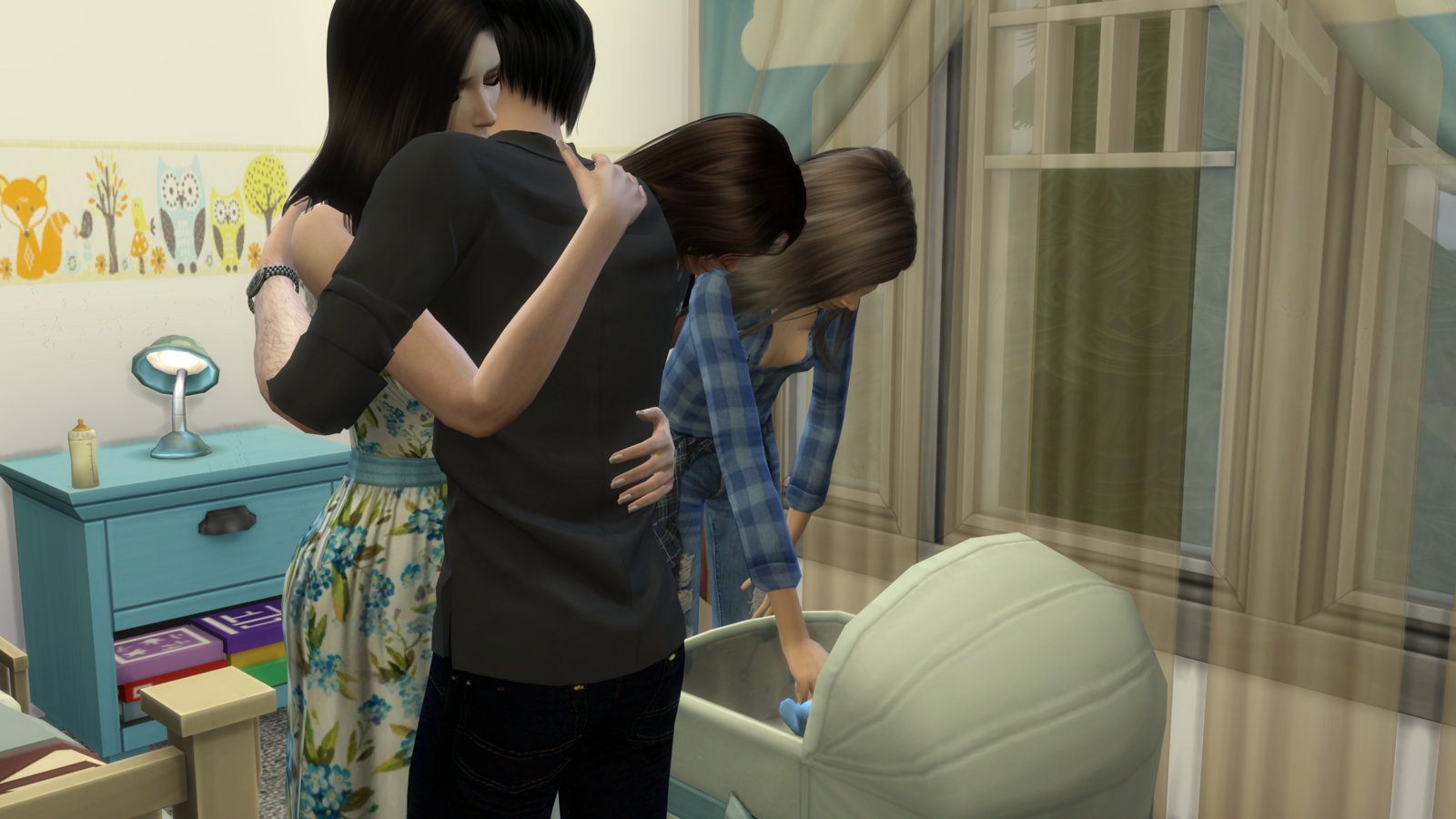 Jacob still enjoyed working with KC and excelled at his job. He jumped at every chance of overtime he could get, for extra money, even though KC liked to tease him about just trying to get away from diaper duty, but knew in reality Jacob was hoping to move out on their own one day soon, something Abby did not seem too much in a hurry for and neither was Heath, even though with both parents working, he’d still end up babysitting anyway. He was still very attached to Abby and did not want to let go, even though she was a young woman, wife and mother now.

Abby worked with Sam in her flower shop, just like she had wanted to since childhood. Heath wasn’t too thrilled that his brilliant daughter wasn’t pursuing a degree but eventually let it go.

As for the Camerons they continued on as they had. Holidays came and went, always celebrated together at the Beach House.

Again, thank you to Audrey of New Beginnings for Forrest Gray and his family.

12 Replies to “Epilogue) Terror Teens – Dawn of the Next Generation”