Darkness, only interrupted by intermittent street lights and the faint reflection from few illuminated apartment windows.
Loud noises, echoing eerily magnified through the night. The sound of several feet running through a dark alley mixed in with shouting as several human forms rushed through the twilight. 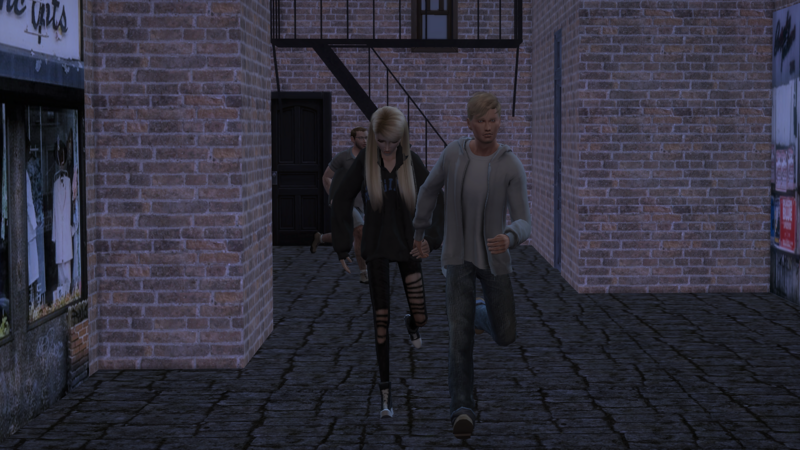 “You scoundrels! I will teach you to never rob me again!” the words pressed between heavy breathing. 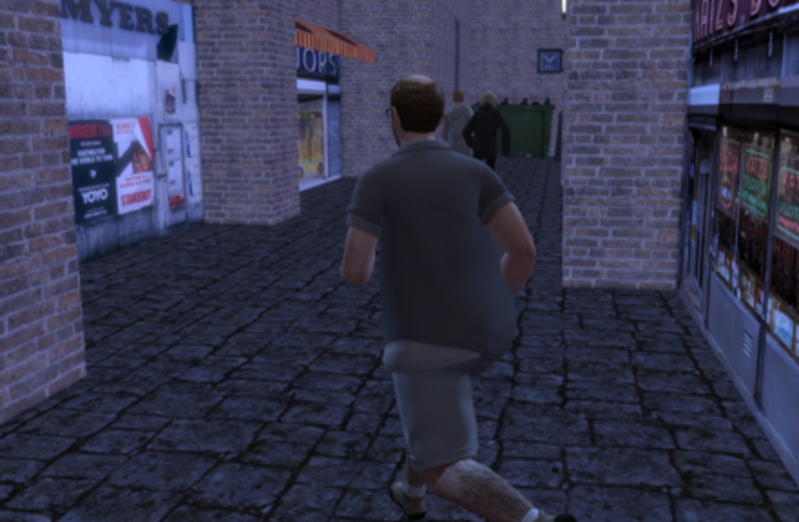 The grimy, heavy set, middle aged man was about to give up, out of breath and not fit enough to keep up with the two teenagers, when the girl tripped and fell hard onto the cobblestone, letting out a painful scream. The older man got a second wind and started running again after he was about to give up.

“Em, get up, quick!” the boy urged, while trying to pull her up. 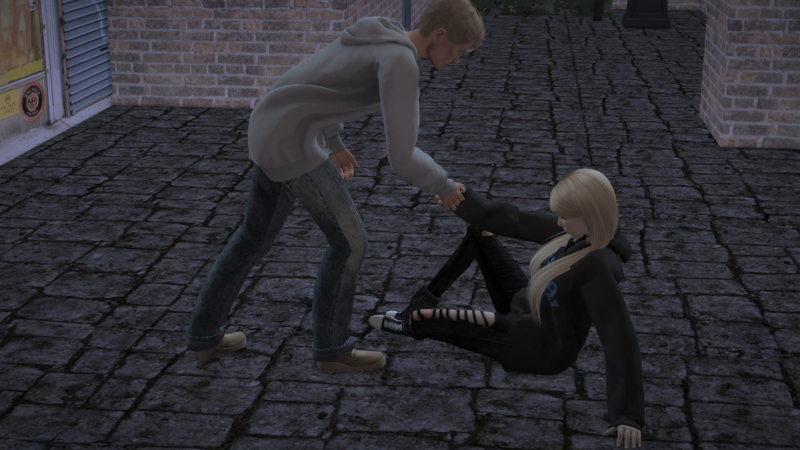 “I can’t … OW, my ankle … ouch!” the girl sobbed, quickly comforted by the boy when the man, much stronger than the teens combined, had reached them, picked up the girl and threw her over his shoulder, leaving the boy no other choice than to followed him like a sheep the shepherd. 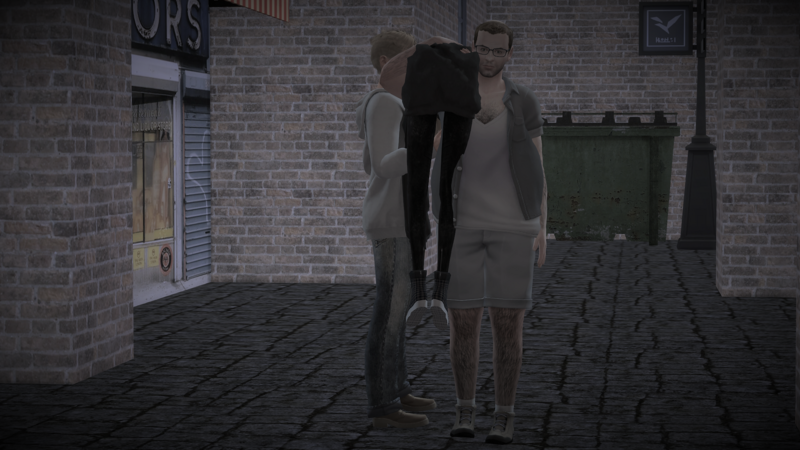 He led them down into a murky basement, then locked the door behind all three of them, sliding the key into his one size too tight pants.

“Can we get some ice for her ankle?” the boy asked, generating unamused laughter from the older man.
“No, you filthy scum, you cannot. Robbing me blind, again and again, I’ll show you what’s up!” 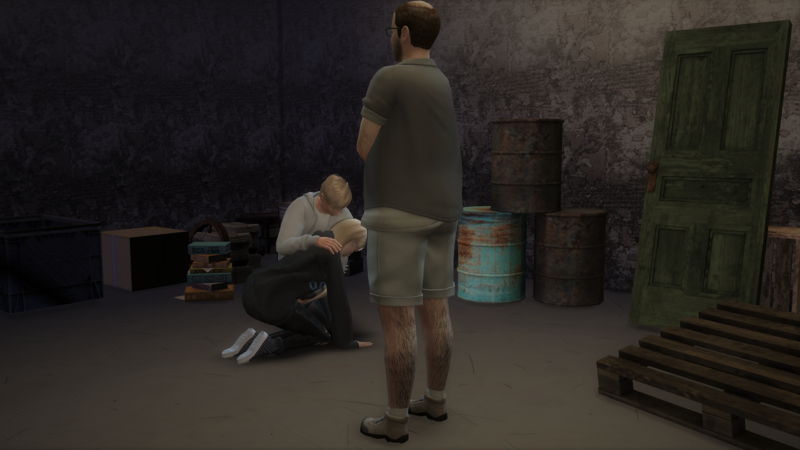 “Please, she is in pain. Do you have pain meds? Please!” the boy urged, watching the girl sob and whimper.
“If I had any, you would not get even get to sniff them.”
“All we took was some food! How is that so bad? You have so much of it in your store …”
“Yeah, and last week your buddies were here and took my entire cash. And the week before that, too, and they took my van. Enough!” the butch man barked.
“We don’t have ‘buddies’. We never robbed anyone! We just take stuff without paying sometimes, and only what we really need to survive! But fine, so call the police. Maybe they will get her the help she needs.” the boy looked at the crying girl in distress.
“Police? HA! I will take care of you myself. You’ll stay right here, where you cannot do any harm. Cops are useless. They have done jack-all so far. If I hand you over, they’ll slap you on the wrist and we’ll continue on as before. No way!” he almost yelled.
“That wasn’t us. All we ever took was food! We are hungry!”
“Talk all you want kid. Let me see that girl. Ha, a pretty one, if you hose her off that is. I may have some other use for you yet. My slut of a wife left me years ago. Man has needs. I think I’ll take you with me, doll.”
“No, leave her alone!” Josh jumped the man trying to stop him, to no avail. 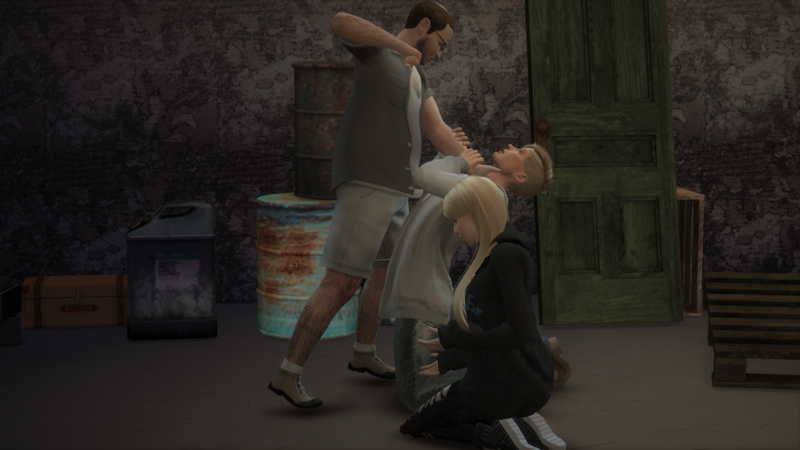 Without warning he punched the boy’s face, hard, that he went down like a felled tree, barely still conscious even before his head slammed down hard on the concrete floor. Vaguely he could see the man drag a fighting and screaming Emerson along, before all got dark around Josh. 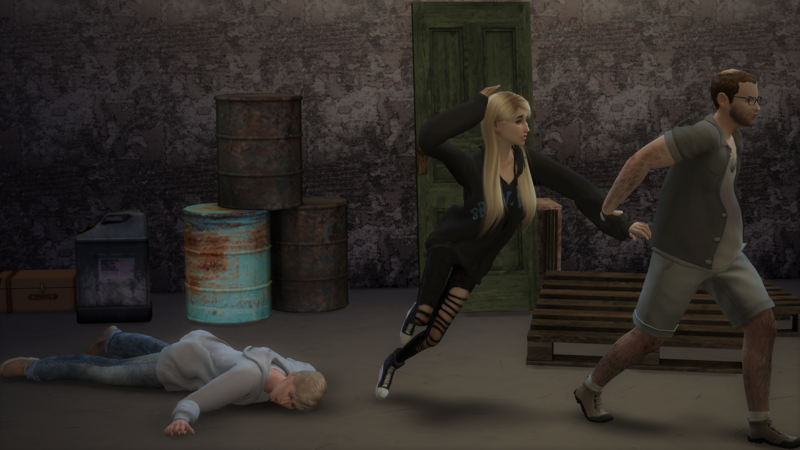 When he woke, the girl was back, he crawled over to her, his head aching terribly causing him nausea, and his brain could not process why she pulled away from him, sobbing hard. 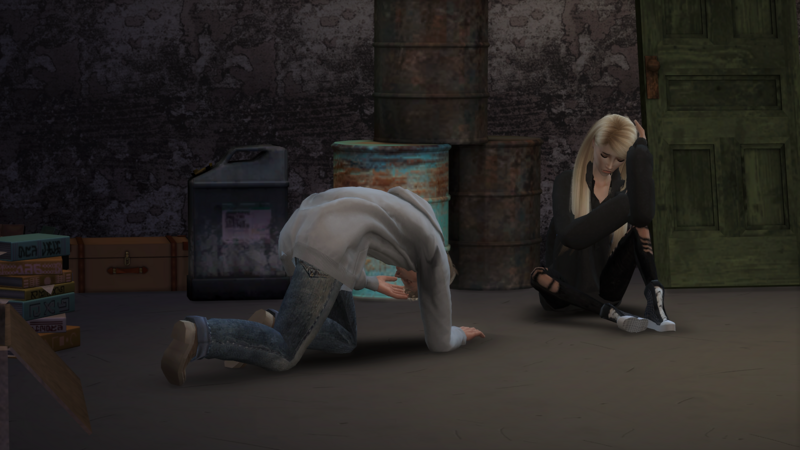 “Em, what is wrong? Is it your foot? Let me see…”
“DON’T TOUCH ME!” she warned, flailing her arms at him uncontrollably, until he backed off, staring in disbelief. All they had was each other. Why was she like this to him when all he wanted was to comfort her?
“Em, stop! It’s me! I just want to help you!” Unimpressed he held on to her and she quit trying to fight him off.
“Leave me! Stay away! Just … don’t …” she started sobbing softly.
“Did the man … hurt you?” 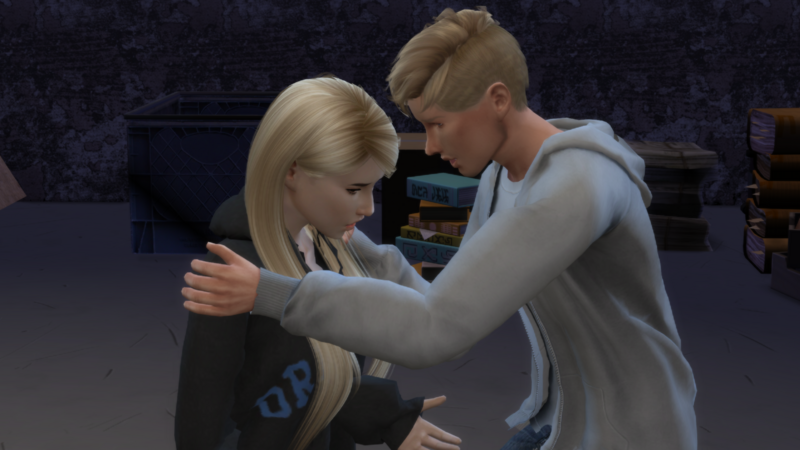 “Hurt me? I hate him! I hate everyone and everything!” she spat out the words in disgust, then sobbed uncontrollable. Josh felt helpless.
“Emmi …”
She spoke no more after that, but gave him a glance when their eyes met it send chills down his spine and he understood what had happened. That swine had violated her in the worst way! 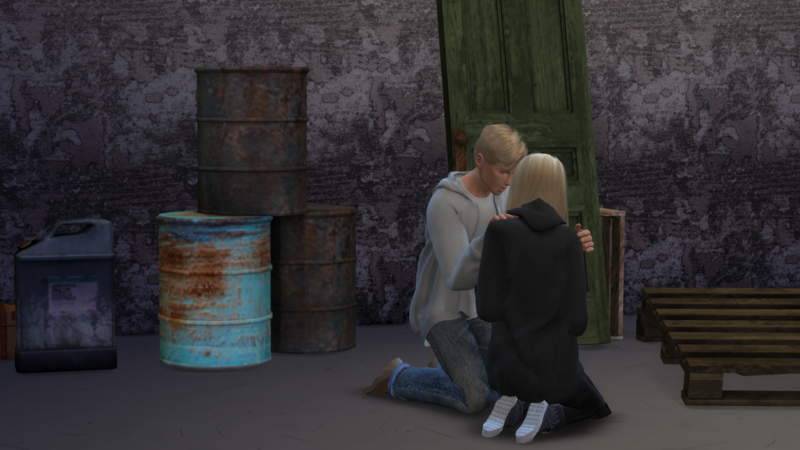 He wrapped himself around her like a shield and she let him, silently sobbing as he quietly succumbed to his feellings of guilt. He had failed to protect her. Tears burned hot beneath his lids. 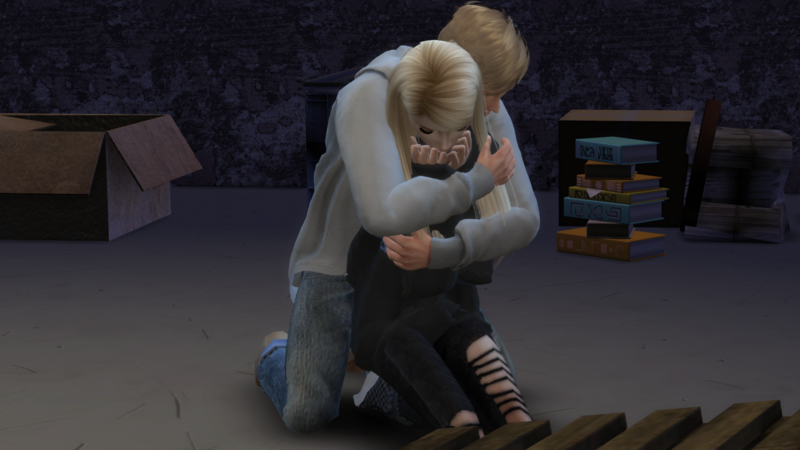 Sure, it was humiliating and unmanly to cry, blah blah, but nobody was here to see and he was a 16 year old living on the street.
It had been rough.
So much rougher than they had ever imagined.
All his life both of them had been sheltered. Neither had the faintest idea how naive they both had been and still were. How innocent they were.
No more.
The awakening to the reality of life on the street was bleak and rough.
They had gotten yelled at, spat at, trash thrown after them, they had been chased away like sewage rats, they had gotten beaten up, stolen from, lied to, everything remotely imaginable, and gone hungry for days at a time until the hunger pangs became a constant companion to both. They had learned the hard way that if food was easy to come by, there was a reason. Several horrendous sick stomach bouts, where after much puking, they found themselves even weaker and hungrier than before. Constantly they were cold, dirty, itchy and rarely ever comfortable. While both had figured out reliable ways to clean themselves, the clothes would never be truly clean. The disgust was only ever surpassed by the hunger. So hungry. All the time, hungry.
Which was what got them into this situation. They were both still new to life on the street, even though it had been months since they had run away. How many Josh could not say.
There were no calendars, clocks did no longer matter. It was warm, so must be spring, maybe summer. When they left it was just before Harvestfest. Probably nearing half a year, plus minus a few weeks.
There were kids younger than them who had lived on the street for years, who could outsmart them. And did every chance they got.
Famished once again, they resorted to stealing from some filthy little corner store. This was the third time, but the first time they got caught.
In the midst of this thinking, the door was unlocked and the man came back. Josh stiffened.

Instead of bringing them food and water, as Josh had hoped, he came empty-handed, but pulled Emmi back up to her feet by her upper arm, but both tripped and he landed hard atop her, she whimpered and cried, when Josh went to fight him.
Suddenly the man was holding a gun, which he slammed against Josh, who lost balance and fell to the ground, the man tipped over onto his behind still on top of the girl. 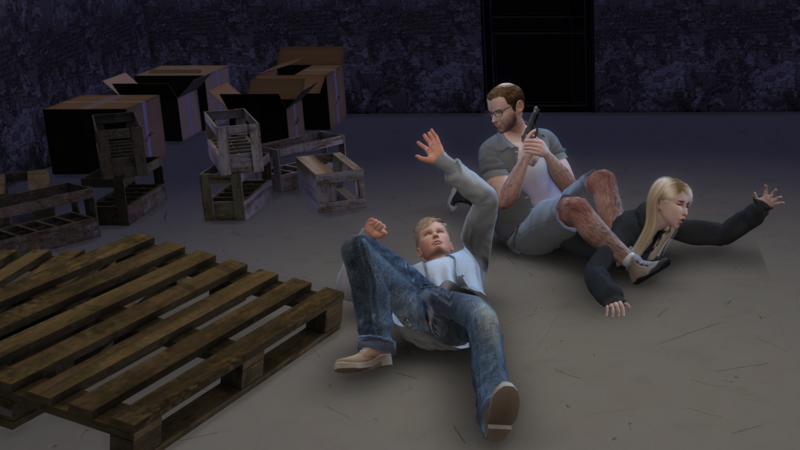 A brawl ensued and somehow Josh managed the gun away from the man, who pushed him aside. Josh once more went flying.
As he wrapped his hands around the weapon, he saw in his peripheral vision how Emmi tried to help, swung a wooden board against the man, which did not even cause him to flinch as he was still atop the now screaming girl who was pinned to the ground.
“Get off her!” Josh yelled, now back on his feet trying to kick the man’s head but missed, distracted when he saw that the older man had pulled a knife from his belt, which he was holding up to the frightened girl’s throat, her eyes wide with fear. Josh froze in his tracks. 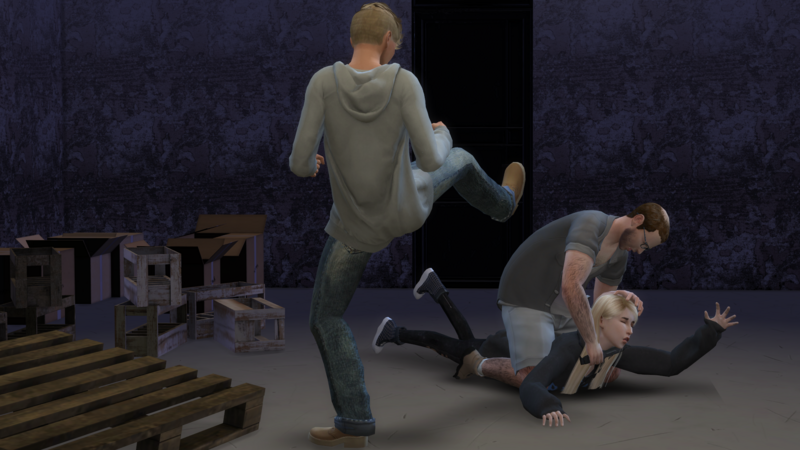 “I am going to cut that little bitch’s throat!” he warned and looked like he meant every word.
“NO!” Josh panicked, in in seconds, before he had time to consider what he was about to do, in a reflex he had pulled the trigger of the gun he was still holding. 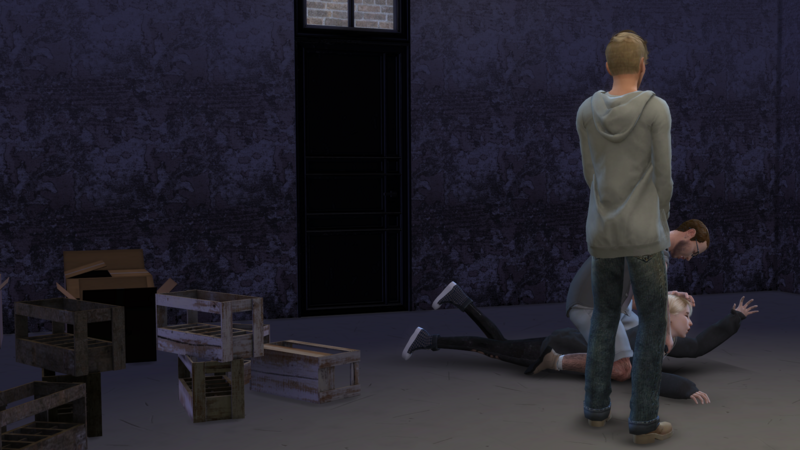 He felt his hand being pulled back hard, then stared at the man, who collapsed instantly as Josh dropped the gun.
No more movement aside a moaning Emerson trying to climb out from underneath the heavy burden that now lay lifelessly on her. In a near trance he helped her, staring at the man. 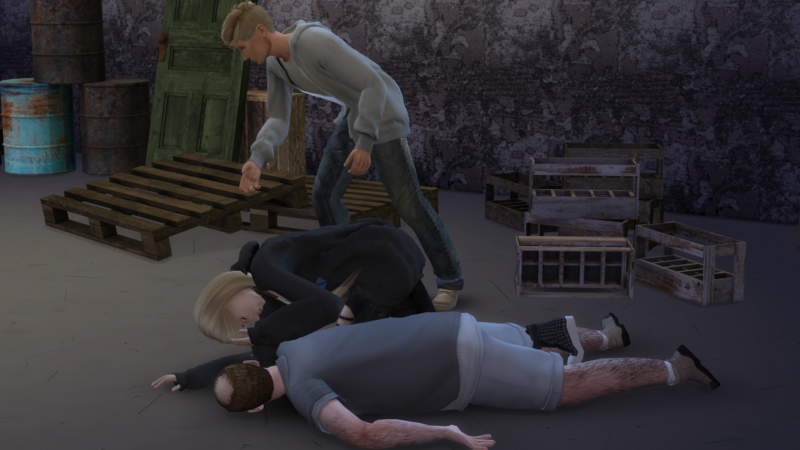 He could only see his eyes, still open, but no more life within them as his gaze appeared broken and glazed over.
“No. No. NO. NOOO!” Josh screamed, soon joined in by Emmi’s scream, who had come to, and realized what had transpired.
They ran. 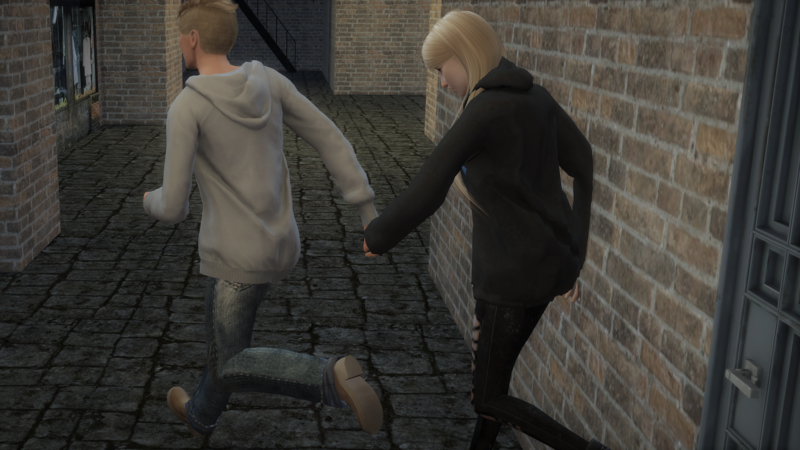 Back in their hiding space, they cleaned themselves up, hands and bodies shaking, even found some pain medication in a first aid kit they had once found. It had long expired, but was all they had. 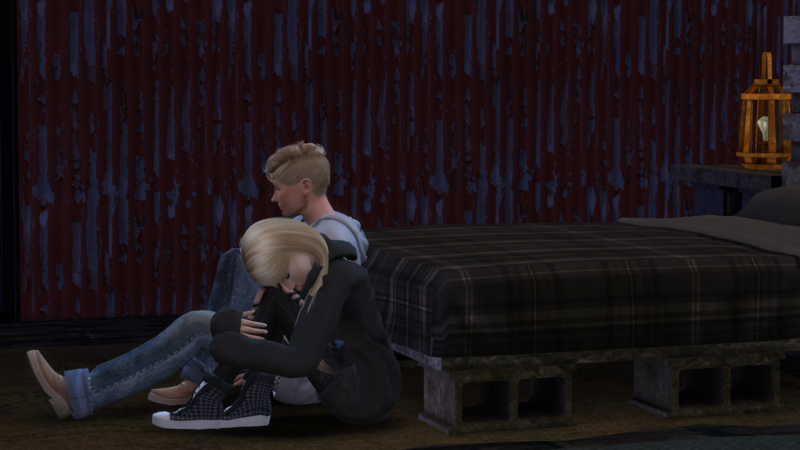 “I should bring you to a hospital …” Josh finally broke the silence.
“We should both go. You took some hard blows too.” 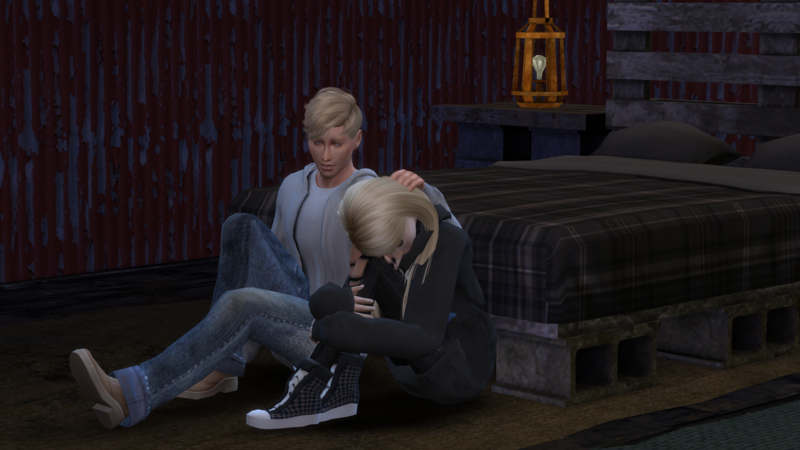 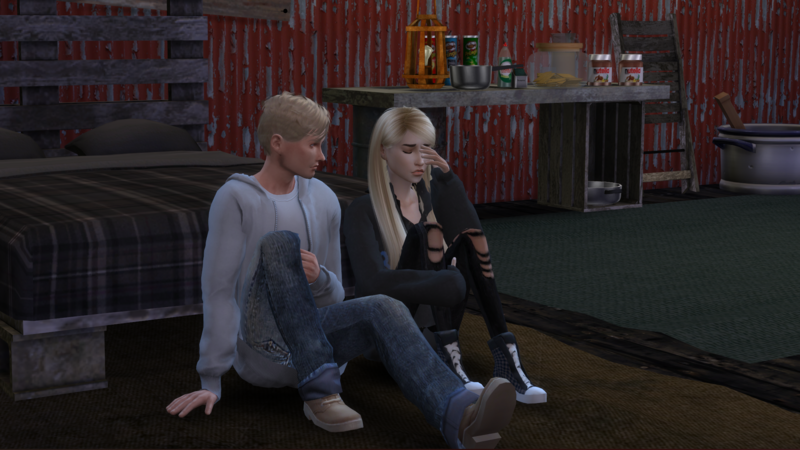 “I .. can’t. I cannot go to jail, Em. They eat boys like me for breakfast. You saw it, I cannot fight worth a dang. I can’t …”
“They may understand … it was … self defense. You were helping me…they’ll understand. Right?”
“Are you sure? We are street kids now, Em, runaways. Scum. I don’t think they will either help nor believe us. No. I can’t Em. Just … can’t. They would call my parents and I could never look my family in the eyes again. Not after this. And jail … I cannot survive prison, Emmi. But you should go. Get help. Go back to safety!”
“I will NEVER leave you, Josh!” 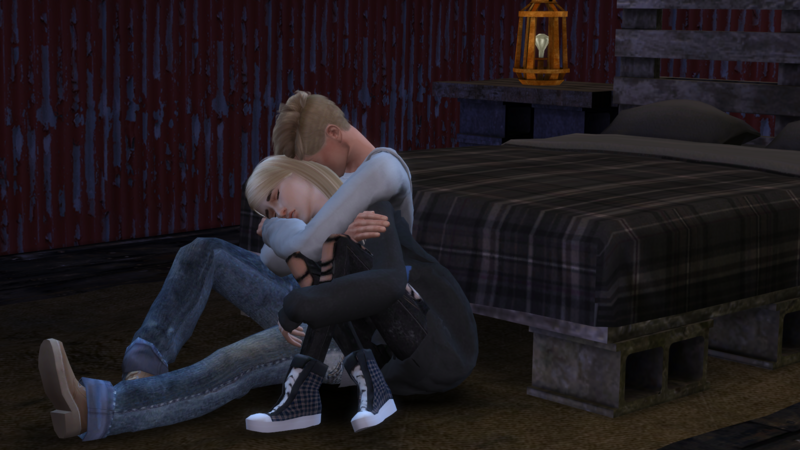