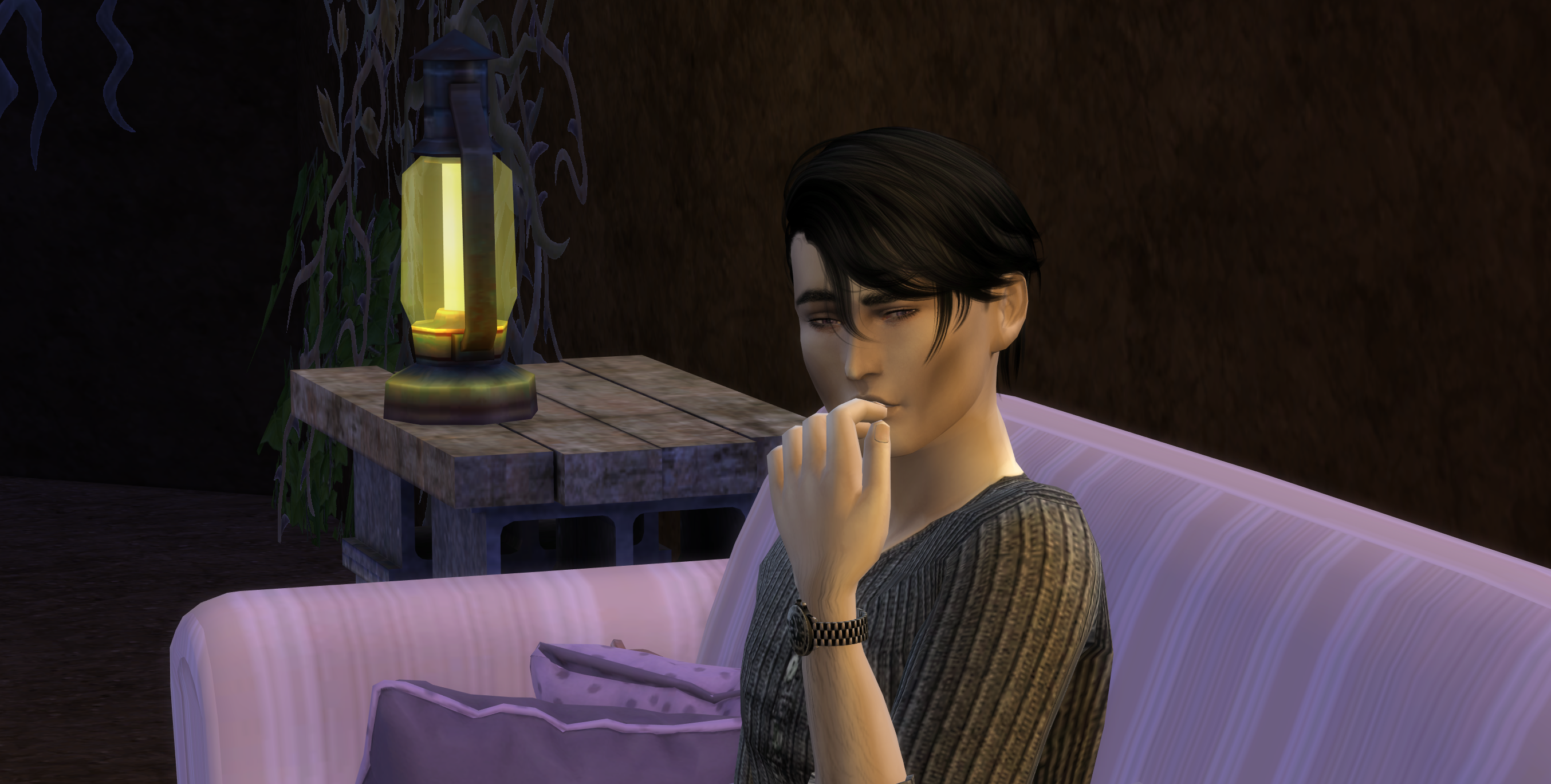 Staring at the phone on the little table, Heath waited desperately for it to light up and buzz with a response by Everleigh, as those came usually nearly instant or close to.
Not this time.
No response.
At all.
His heart sunk even more.
He felt Abigail stirring next to him, then starting to fuss, likely because of the different, unusual surroundings. Gently rubbing her chubby little cheek calmed her already, even more so when he spoke quietly to her.
“Shhhh, sweetheart, daddy is here. Shhhhh. All will be well as soon as Aunty Evey gets here. Let daddy try her one more time.”

The now appeased baby on the couch next to him gargled pleased and went back to sleep while he had picked up the phone.
The battery had died.
He had no charger and even if he had one, there were no outlets here in the cave.
Heath felt hopeless, lost, abandoned and scared.

For the Cameron clan Heath’s disappearance was barely a footnote, except for Everleigh of course and also Blaine, who in his role as the Vice-Elder had been notified by Caleb, the Elder, since this involved vampires. There was not much to be done about it. Heath was the biological father of the baby he had taken, he was a vampire, and there had been a fight.
Most agreed that he would never hurt the child, so for now the Camerons had diverted their attention to their own issues, which there were plenty of at the moment.

For starters there were several weddings planned to take place within days of each other.

The first wedding was that of Evey’s cousin Jordan, Jake and Marty’s son, who evidently had recovered sufficiently from a bad breakup, met a girl online via SimDa, and after a very brief whirlwind romance went on to tie the knot, a lot faster than anticipated as they found out that she was already expecting his child.

The next wedding was a lot more planned and definitely expected and anticipated, namely another of Evey’s cousins, Cailean Caldwell, tying the knot with her college sweetheart Tyler Abernathy.

No surprise pregnancy here, as both had their entire life seemingly planned out to the T. Their wedding gift was a little house right next door to Cailean’s parents’ home in Brindleton Bay. After the honeymoon, they would start trying for baby 1, once that child was born they’d try for baby 2 and then both would have surgery to be done with children. They even already had brochures for schools for their children to be.

The third wedding turned out not to be one. Against everybody’s fears did Isabelle Ferrer not opt to elope with Samuel Rosenstein, but despite her grandfather’s open dislike of him, they had set an actual date for a wedding of the century style celebration in Del Sol Valley, fit for the celebrity level of the wedding parties and their famous families.

Unfortunately, during the preparations, an inconvenient truth surfaced about a long standing affair between Natalie Cameron-Ferrer and the old Rosenstein, Samuel’s father.

Rumor that this was the real reason of her speedy success make the rounds, further adding fuel to the hatred Liam, Natalie’s father, had of the old Rosenstein.

Rhys, Natalie’s huband was heartbroken and immediately filed for divorce.

Natalie ended up putting her now nearly ruined acting career on hold to move back into her parents’ home in sleepy Brindleton Bay to get away from all the unflattering press.
Rhys kept the house in Del Sol Valley, daughter Isabelle stayed with him after Samuel broke off the engagement, due to the bad press.

Despite all her begging, he remained steadfast about it.

The entire Ferrer family was left devastated about all those news all at once.

On top of that did Cameron, Rhys and Natalie’s son, have his own battles to fight, when finding out that the love of his life evidently now was engaged to one of Everleigh’s friends, a vampire named Heath, who incidentally had turned her as well and worst of all, they had a child. Initially shocked, Cam decided to fight for Heather to win her back. Not an easy feat, all things considered.

Him showing up at Heather and Heath’s home had already wreaked havoc.

And in the midst of all this was Everleigh, pulled in all directions, while trying hard to make sure her own relationship with KC remained on firm ground after having been on life-support more than once of late.

It broke her heart that Heath had gone into hiding with his baby daughter, and not even contacted her again after she missed his SOS text on New Year’s. Fearing he thought she abandoned him too and worried about him and Abigail, she tried not to let it show in order to not upset KC.

All that stress eventually amounted to her falling ill. A persistent cold had snowballed into a double-sided pneumonia and after a brief stint at the hospital she was currently at home, sick.

KC had just left for his nighttime job at the bar.

Awoken by feeling thirsty for something other than the tea she contemplated dragging her aching body off the couch to the kitchen. 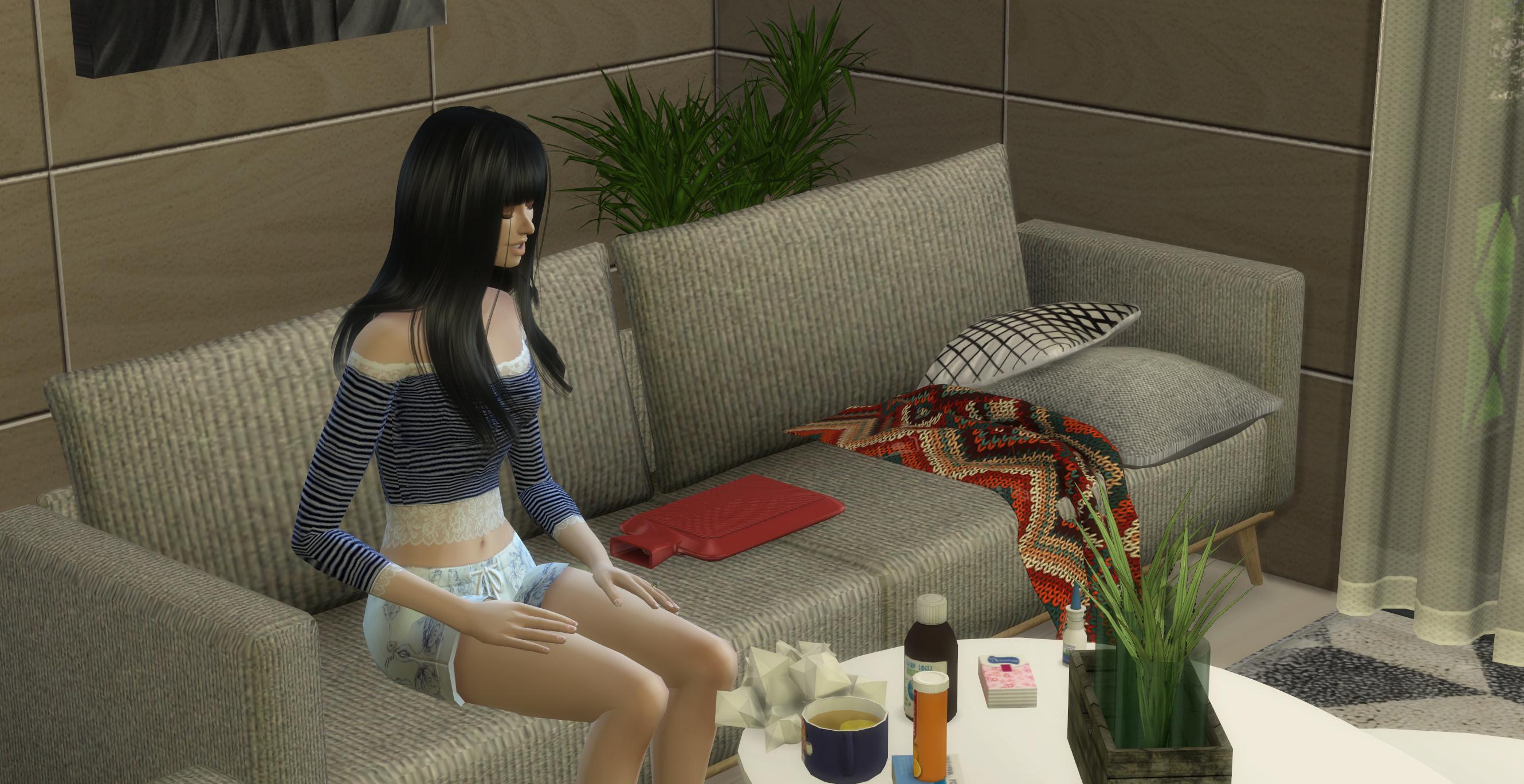 On her way there she saw movement out of the corner of her eye by the glass door of the patio. Heath! With the baby! 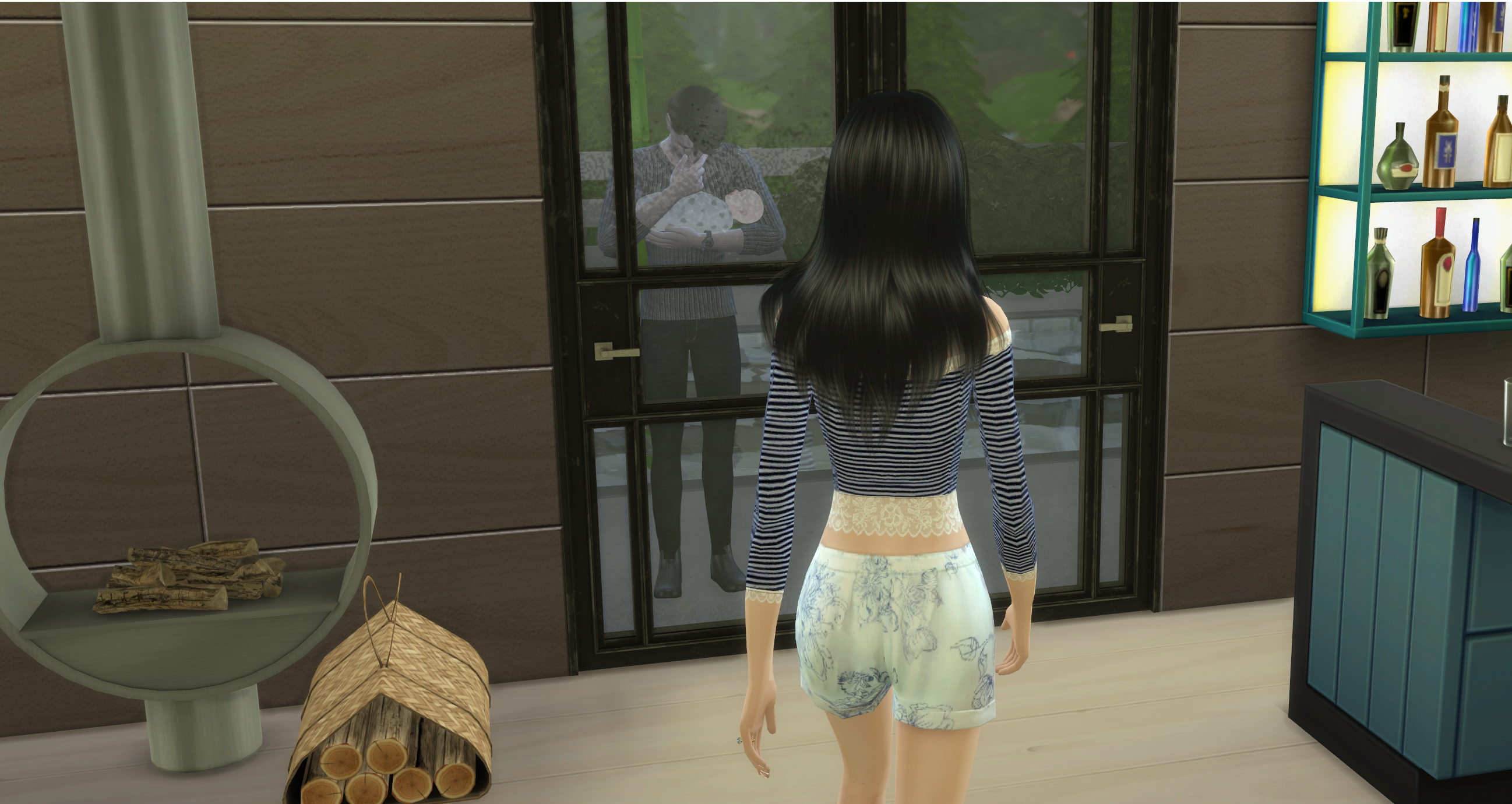 She ran over and opened the door, hugging man and baby, then pulling both inside. 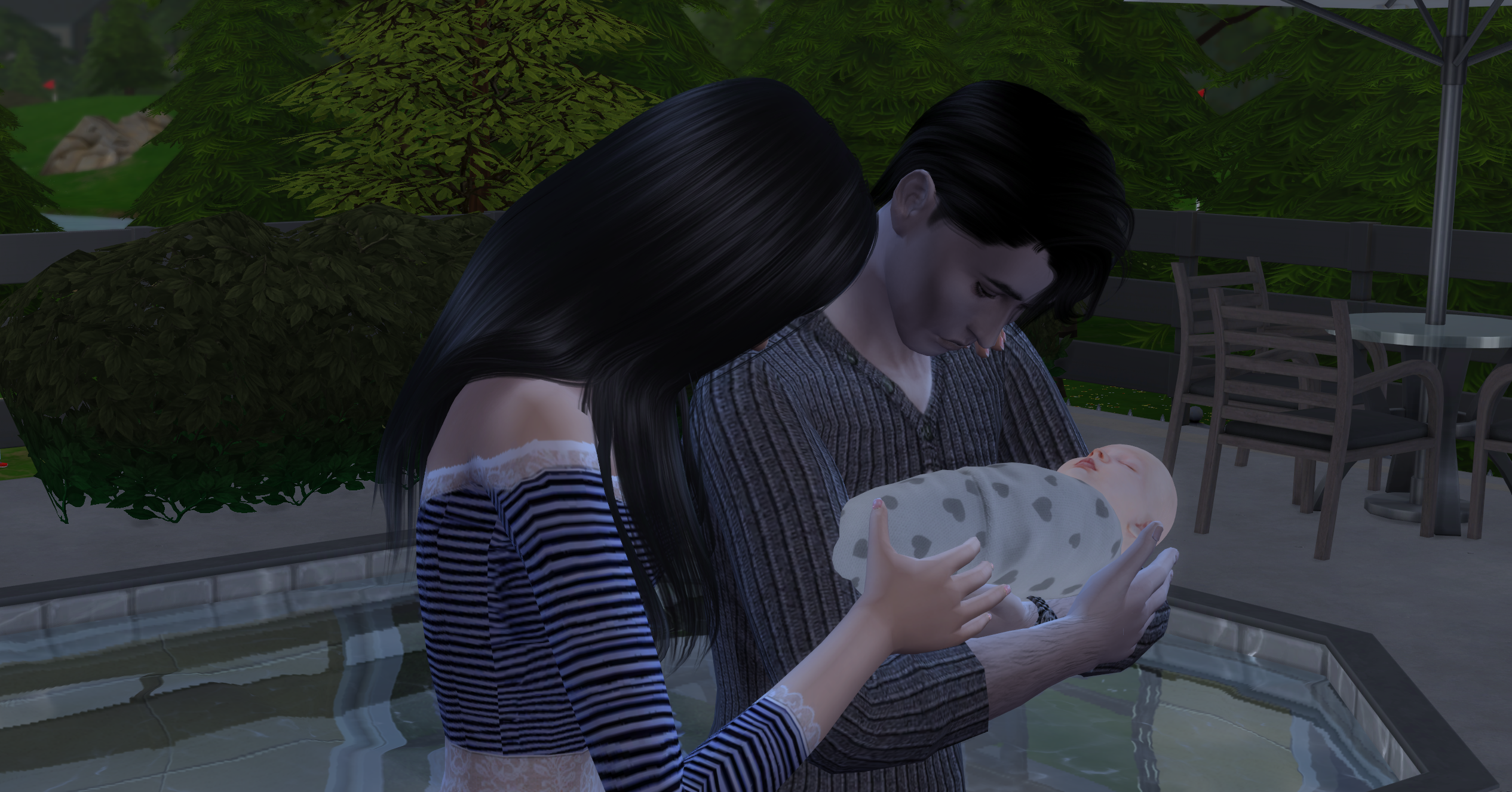 “Heath, thank goodness! I was so worried about you! I am sorry I missed your message, tried you a thousand times since then, goes straight to voicemail. Is your phone off?”
“Battery died. No outlets where I have been.” he briefly explained.
“The Hiding Spot!”
“Yes.”
Everleigh moaned in discomfort, so Heath pulled her to the couch and sat her down, then arranged some pillows and blankets on the second couch to make a cradle for the baby, put Abigail down, who fell right asleep, before he went on to sit down next to Evey.

“Look Heath, it’s great to see you and Abby, but KC only forgave me if I agreed to some conditions. One of those is …”
“…to stay away from me.”
“Not quite. He just wants us to not be alone with each other again.”
“Technically we are not …” Heath smiled and pointed at the sleeping baby.
Everleigh giggled. 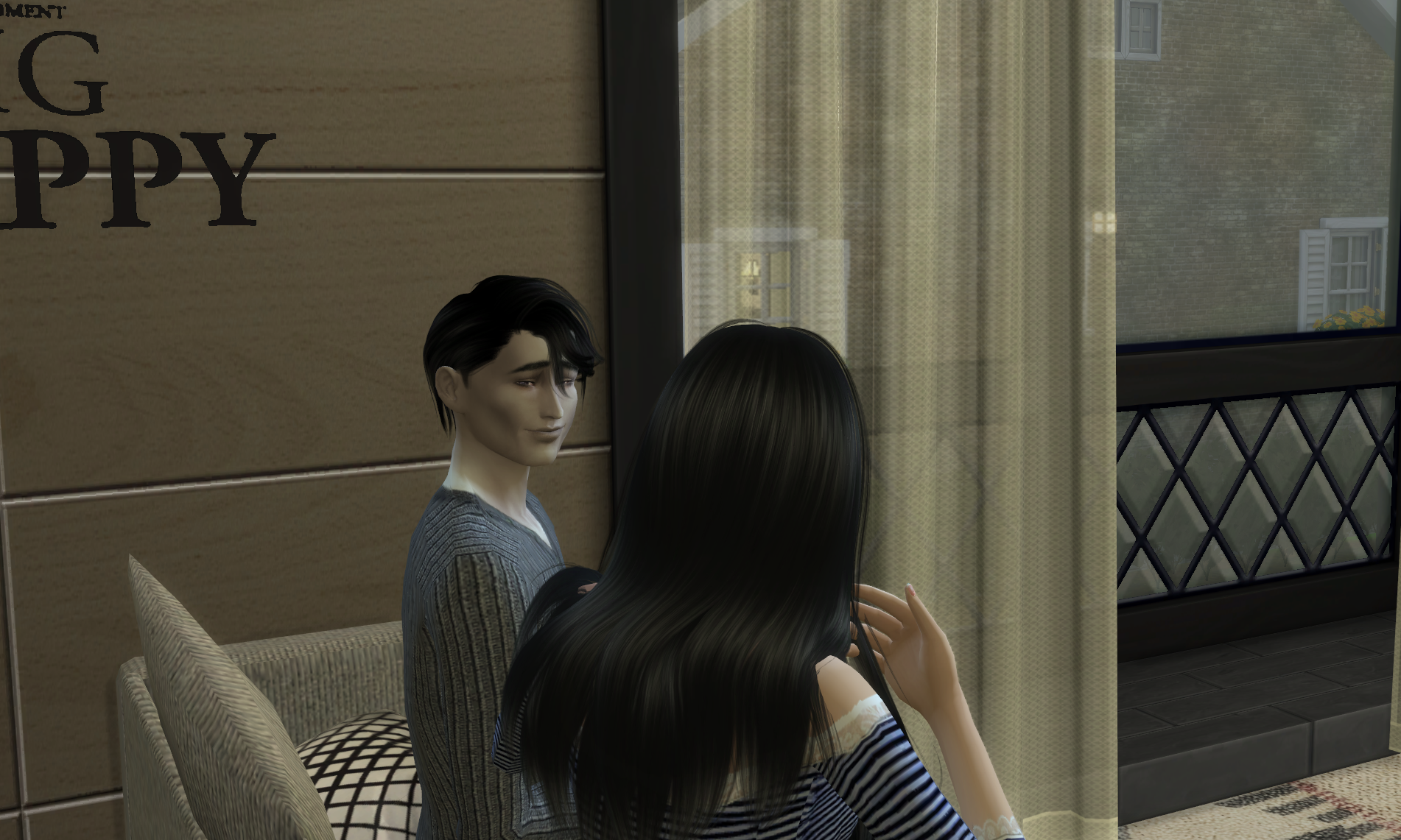 “Quite sure Abby does not qualify as a chaperone in his book.”
“It feels so good to see you, Evey. I was so alone and … desperate.”
“How about you talk to Heather and see how that goes?” 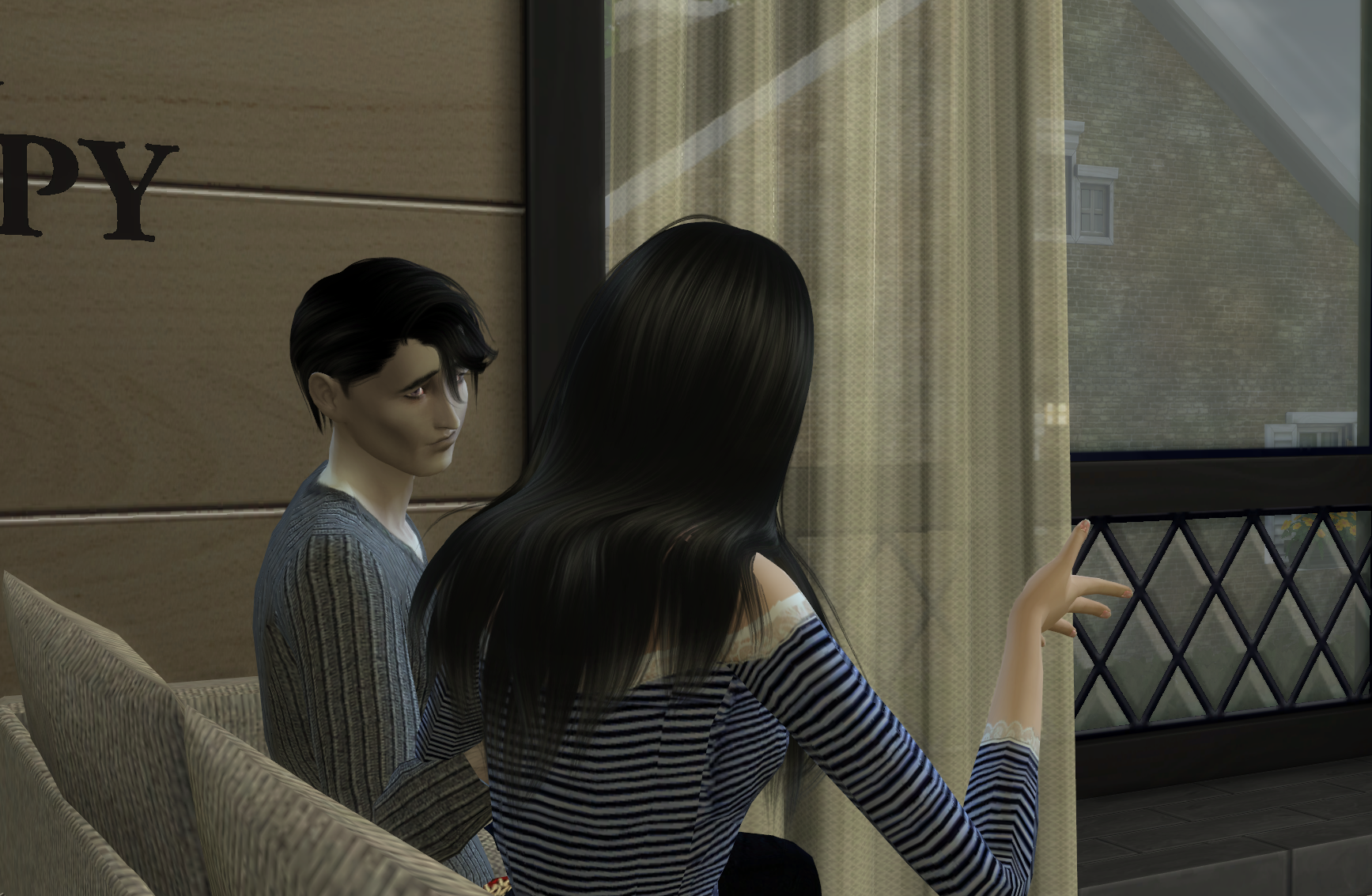 “It won’t go well. Not after I hit her. I shouldn’t have but .. I …”
“Hit her?! You hit a girl!?”
“A slap. I saw them, kissing, twice. When I confronted them she tried to lie to me, when I had seen them with my own eyes. I even told her I saw them and she still tried to tell me I didn’t know what I was talking about and that it all was my fault. I … lost it. She won’t forgive me.”
“Generally I would agree with ya, but speaking from my hole in the ground of having been that woman who kissed another man and tried to lie about it, I can tell you, had KC slapped me, I would probably forgive him. I wanted to slap myself a dozen times if not more.”
“I am afraid to just go home, Little Leigh. Can you go with me?”

“I would, but can’t. You know, KC’s rule. Heather would probably tattle on me, if only accidentally. Just go there and see what’s up.”
“Why is all this so complicated? I do not understand any of it, nor do I know how to react or avoid all this in future.”
“Well, if you did, I would make you write a book and we both would be RICH! People have been trying to figure all that out forever.”

Heath materialized in front of the door to the house that had been his home. He was attached to it, there were so many good memories here. He remembered Evey, KC and him standing there with Heather talking about moving walls and what flooring to use during the remodel. And the kiss.
He straightened up and knocked. 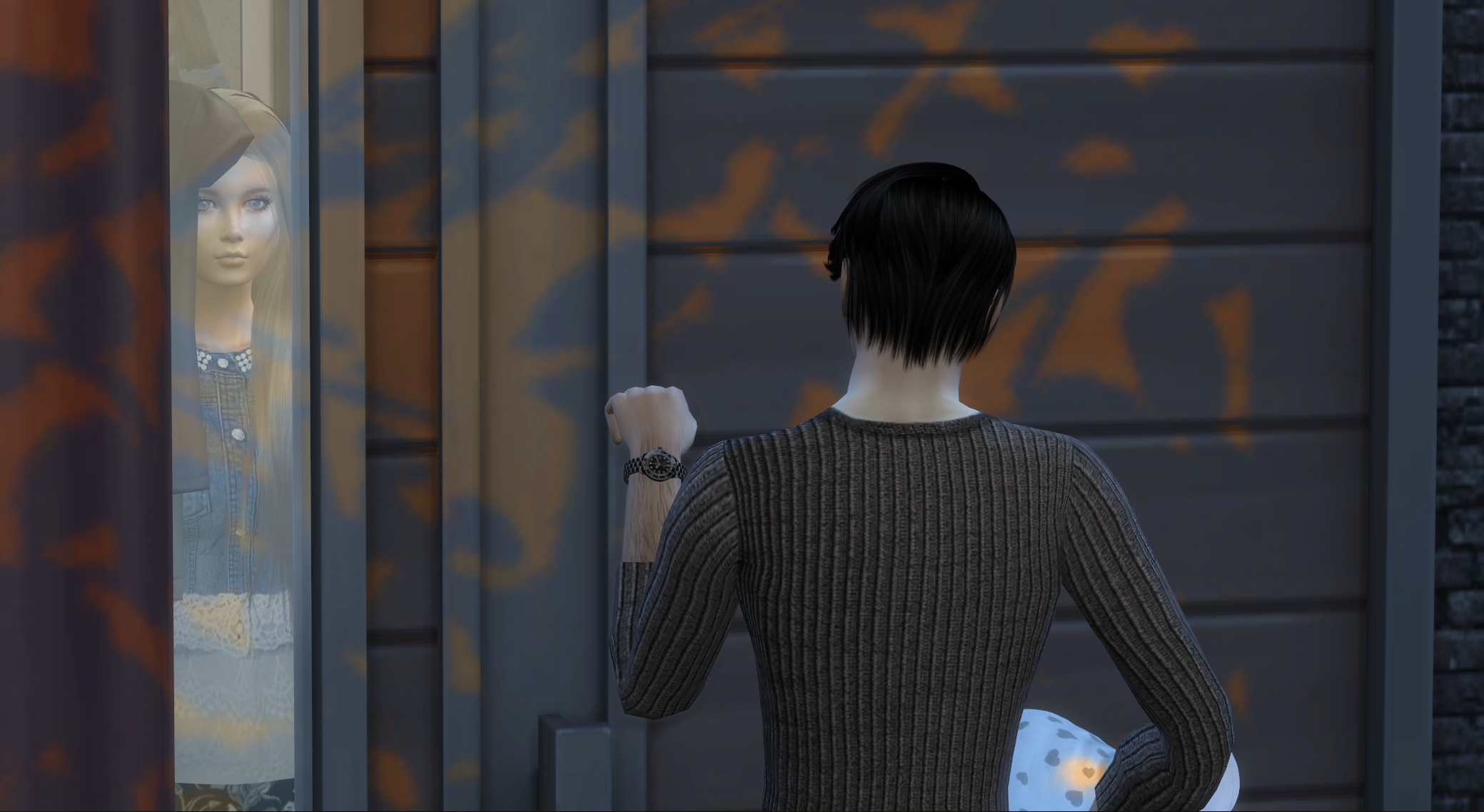 Heather answered, shocked at first, then she took the baby from him to snuggle Abigail, who cooed excitedly when recognizing her mother. 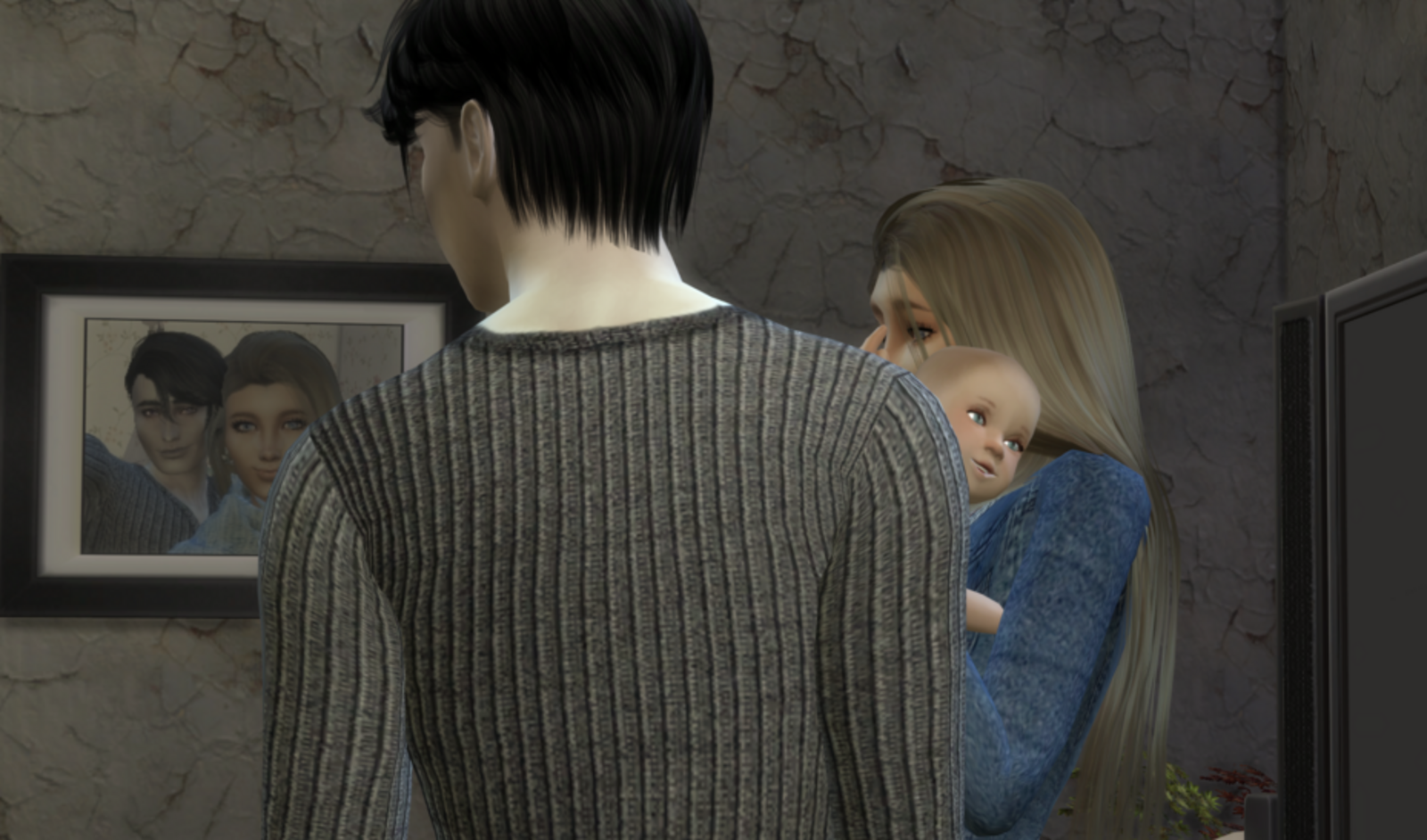 She walked away but left the door open, Heath took that as an invite and just sat on the couch while Heather spend time with Abigail.

After putting the baby down for a nap in the nursery, Heather joined Heath in the living room.
Showtime.
“I am sorry about it all Heath.” she quietly initiated the conversation.
“I am sorry too. Truly.”
“I am even more sorry for having to tell you this: I am leaving you. You can keep the house, wouldn’t be right for me to take that from you.”

Heath closed his eyes.
“You really are a great guy, Heath. But too much has happened between us way too quickly, and I realized that I still love Cameron. I am moving back to Del Sol Valley with him. I have no idea how we both could fairly deal with Abigail, but I am willing to leave her with you for now, until I get settled and Cam and I figured out a routine, since I am now restricted to nighttime. Once we figured all that out, I can come get the baby.”
“I’ll keep her. Please leave her with me.”

“Okay. That’s fine. As long as I can visit my daughter. I do not think that Cam is quite ready to be a sort of step-parent to an infant anyway, especially with all he has to deal with himself at the moment. His whole family just fell apart. He needs me by his side now. I hope you find the right girl one day, and I am sorry to say that I am not that girl. I wished so much I were. Maybe, under different circumstances I would have been. We both made too many mistakes all at once, now there is no coming back from it. I am already packed, most of my stuff and my car are at my parents’, and you coming back now saves me writing a lengthy letter to you. All this considered, I think it is best if I left now and just wait for my flight at the airport.”
She got up, came back with bags then went to say goodbye to their daughter.

Afterwards she simply walked out that door, Heath heard a car drive off. 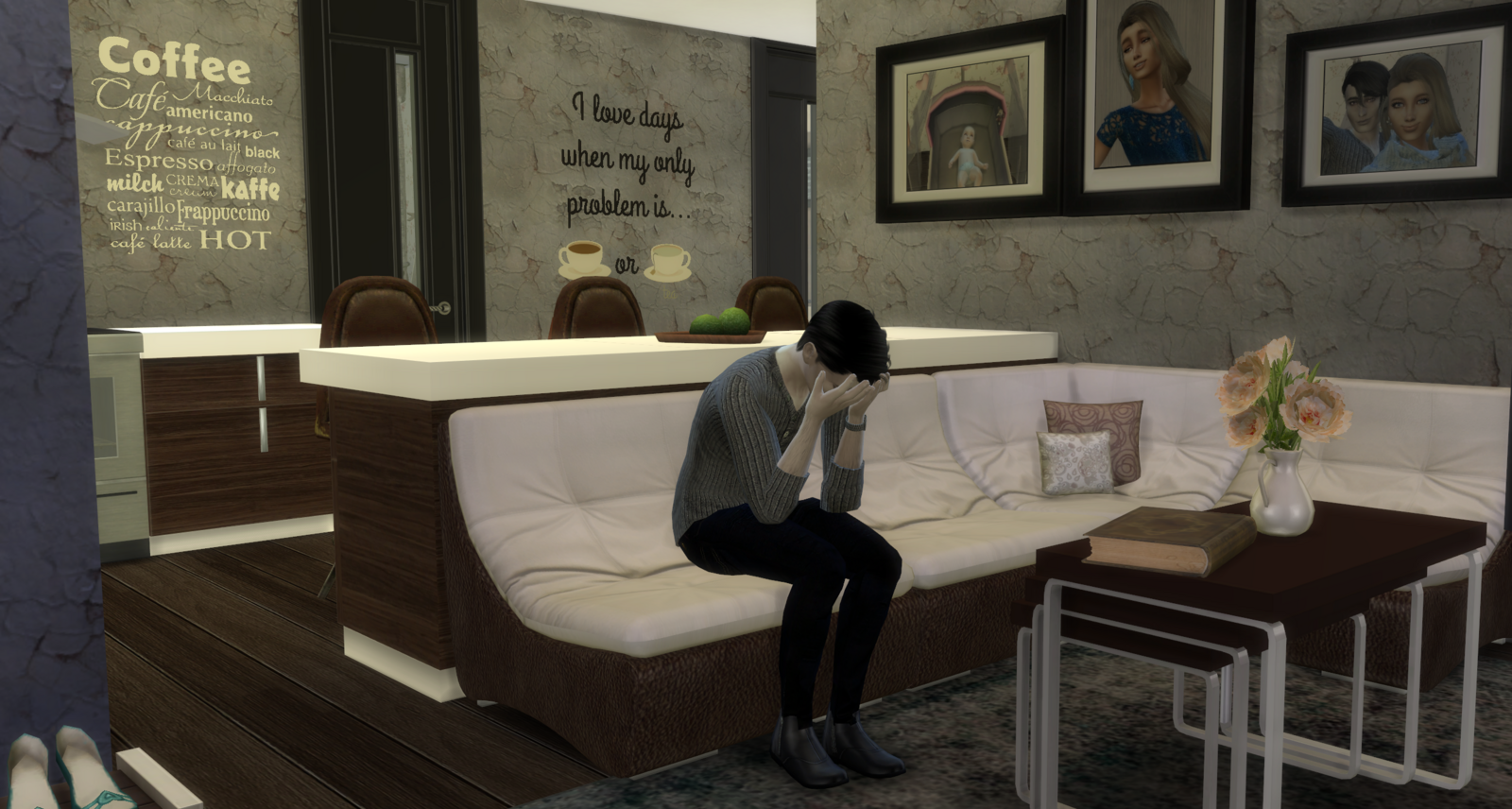 Heath felt paralyzed, sitting on the couch, and for the first time in his life cursed the fact that he was not like all the other New Breed vampires who had no emotions.
All the things he felt right now were tearing him apart.